As a class of bottom-up viewpoint in nanoparticle synthesis, inert gas condensation is a perfectly developed and popular nanoparticle synthesis technique owing to its capability and flexibility to control the synthesis process. Briefly, the material is evaporated under the pure helium atmosphere with the helium atoms serving as a cooling agent condensing the atoms to finalize the formation of nanoscale particles. In the process of nanoparticle synthesis through inert gas condensation, there are several variables namely the type of inert gas the flow of forced gas, inert gas pressure and source temperature. These factors are examined so precisely in order to have a great control over the resulting nanoparticles 1. It is known quite well that the reason for nanoparticles to be the center of attention is the quality of them to be composed of structures that occur normally at elevated temperatures. The considerable reduction in the size and an increase in the surface-to-area ratio keeps the material in a metastable condition and stabilizes it in phases with higher temperatures. The quality of nanoparticles to be dispersed in a matrix containing different materials is regarded as an important factor, especially the studying of the giant magnetoresistance (GMR) effect 2.

Studies support the fact that primordial matter with nanoscale phases condensed from our solar nebula and star forming region of space as well as the synthesis of ultrafine particles in laboratory-scales goes back to the early 20th century. In fact, the first experiment as the basics of inert gas condensation was in 1930. Back then, there used to be a number of disadvantages with the ultrafine particle synthesis methods when inert gas condensation emerged as a way to obtain particles typically smaller with narrow particle size distributions as well as electrically insulated individual particles. However, due to disability of metal vapor source in sustaining a constant temperature, average particle size and the rate at which a vibration was carried out were distinct. In addition to this, the amount of synthesized products was ignorable just because the resistive filament could transmit a large amount of electrical charge. These difficulties were overcome through the application of the inert gas condensation method through which metals like Mg, Zn, Sn, Cr, Fe, Co, Ni, Cu and Ga were evaporated from a crucible into an atmosphere of inert gas with low pressure to fabricate nanoscale particles based on the important defined parameters such as gas type, evaporation rate and gas pressure the affect the particle size and morphology 1.

As it was mentioned earlier, inert gas condensate is a bottom up technique to obtain nanostructured materials based on two major preliminary steps. The first step involves the evaporation of the material to be obtained in nanoscale range and the second is the rapid condensation of the evaporate material to favor the particle size and morphology. The inert gas condensation devices are generally made of a chamber whose pressure is evacuated to fall down to 2 × 10-6 Torr using a diffusion pump. Another part is a crucible where the material in heated gradually via irradiation from graphite as the predetermined temperature source. After the evacuation is done, inert gases like He, Xe, or Ar are leaked into the chamber with lower pressures of about 0.5 to 4 with the subsequent fast heating of chamber at constant temperature and inert gas pressure. At this point, the particles with ultrafine sizes in the inert gas phase are collected in a surface that is cooled by water. The Collection process is carried out via a carbon coated electron microscope being attached to the core of the water cooled surface to give a simultaneous observation of the particle size by transmission electron microscope. It is also possible to obtain the sample as a monolayer on the grid. 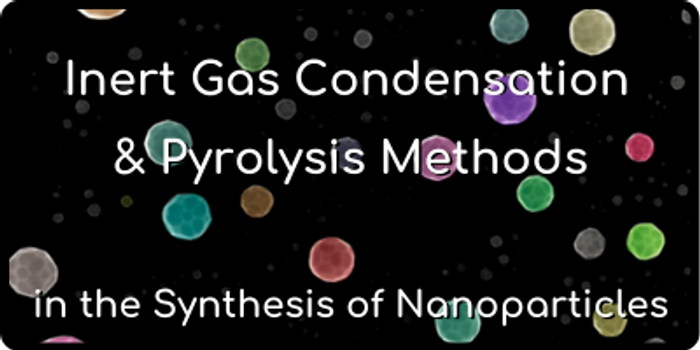 So far, different techniques have been tried to evaporate metals in the inert gas condensate chamber. These methods are thermal evaporation, laser evaporation, sputtering, electric Arc discharge and plasma heating. The step after evaporation is particle collection which is done through thermophoresis immediately on the cold surface above the source. Technically, thermophoretic driving force is generated as a result of temperature gradient making the particles mobilize in the direction of decreasing temperatures. After the particles are deposited, the powder is removed into a compact solid which is basically nanostructured. In the course of vapor phase synthesis of nanoparticles, conditions come up in which there is thermodynamic instability relative to the formation of nanoparticles to result in particles homogeneous nucleation only if the rate of supersaturation is adequately high as well as the reaction kinetics. After the evaporation takes place the remaining supersaturation is maintained by the vapor phase molecules on the product or condensation.

Morphology and Crystal Structure of Particles

In inert gas condensation method the size and crystal and properties of nanoparticles depend on the pressure, species that are present in the atmosphere and the particle growth region above the surface of the evaporation chamber. The time the nuclei spend in the growth region and the amount of pressure critically determine the size and morphology of the particles. However, a high pressure in the growth region could lead to a large particle size because of the consecutive agglomeration and less sintering. Therefore, in order to obtain particles in smaller and finer sizes, the pressure has to be kept low. More importantly, the size and morphology of the particles differ depending on three zones with different temperatures and metal vapor concentration, where the collection of operation is carried out 1.

Inert gas condensate has emerged as a technique with a lot of advantages in fabrication and synthesis of nanomaterials. In fact, an extensive range of materials such as intermetallic compounds, ceramics metals, alloys, semiconductors and composites can be synthesized via inert gas condensation technique. Specifically, it is possible to generate nanoscale particles from just about any material that can be vaporized. Inert gas condensation is a very flexible one in terms of cluster sizes to be made, controlling the size and the size distribution of the particles over a broad range through the process and parameter alteration such as temperature and pressure. Particle surface cleanliness and ultrafine sizes of the particles make it possible to overcome the conventional restrictions of kinetics and phase equilibria through the combination of high driving forces, diffusion distances and more importantly, uncontaminated surfaces. So far, inert gas condensation has been employed to synthesize metallic nanoparticles like manganese (Mn) nanoparticles, Nickel (Ni) nanoparticles, iron and iron oxide nanoparticles and size-controlled gold/palladium nanoparticles (Au/Pd NPs) 1.

The inert gas condensation method is a simple technique that involves material evaporation from a source in the atmosphere of and inert gas with the consecutive condensation of them into nanoparticles in the cooler parts of the operation chamber. Fabrication of nanoscale materials via inert gas condensation leads to ultra-fine monodispersed materials with practically narrow particle size distribution and excellent resistance because of the high degree of chemical and physical control over the parameters involving in the process as well as uncontaminated particle surface.