HIV Facts Diagnosis Based on Microchips

In the case of HIV management, it is of a high degree of importance to detect and quantify viruses based on an inexpensive platform rapidly in resource-limited settings. Recently, a microchip-based on cellulose paper with easy to fabricate method has been designed in incorporation with printed graphene-modified electrodes to process the fast detection of HIV-1 taking advantage of electrical sensing.

The impact of electrode material and its geometry on the performance of the microchip in detecting electrically conductive and serially diluted samples, as well as the optimized microchip with HIV spike samples, have been evaluated. In principle, cost-effective, fast and efficient detection of viruses in biological media at the point of care is deemed to be an urgent requirement in the case of contagious diseases detection and treatment in settings that are basically resource-limited. Moreover, the detection and quantification of human immunodeficiency virus like HIV in micro and nano volumes of biological samples is of a particular interest in the early detection ages of disease and treatment monitoring in many countries from around the world.

Facts and Statistics about HIV

Based on the reports by UNAIDS, nearly 35.3 million people suffer from HIV globally of which, 25 million is (nearly 70% of total HIV patients) are basically from sub-Saharan African countries. Only in 2012, a budget of 18.9 billion dollars was the total medical expenditure for HIV and rose up to 22 and 24 billion dollars by the end of 2015. Therefore, it has been highly effective to expand access globally to anti-retroviral therapy in order to reduce mortality in developing countries. Nevertheless, a considerable percentage of HIV-positive individuals have been reported not to receive any therapy and those who get access to the treatment might not have the chance to receive an efficient therapy more specifically because of the limited access to the proper treatment monitoring essays.

The most available rapid HIV test kits, namely OraQuick HIV test fails to have the ability to detect any HIV contagion in the early stages when compared to their capability in detecting antibodies using the principles of an enzyme-linked immunosorbent assay. In addition to this, these tests have been demonstrated not to be able to detect virological failures that are considered critical for any treatment, monitoring and diagnosis of antiretroviral therapy failure. In effect, HIV sensitive antibodies are released after 3 to 8 weeks from the initial infection time. Consequently, individuals with an HIV infection are potentially substantial sources for infection transmission in practically acute stage when the highest level of viral replication is processed. Even though nucleic acid test makes it possible to sensitively and accurately recognize HIV and carry out viral load measurements, they are basically possible to be employed in laboratories and that they are time-consuming, require skilled personnel and are expensive.

From another point of view, microfluidics has been proved to have great promise in developing diagnostic platforms and essays for HIV detection and treatment monitoring at the point of care. In addition, electrical sensing does provide robust, rapid detection and sent it to the detection of biological samples excluding the need for bulky equipment and optical-based sensing mechanisms. Particularly, developed electrical sensing modalities can in turn be integrated with microfluidics in order to detect pathogens and viruses in HIV spiked samples. 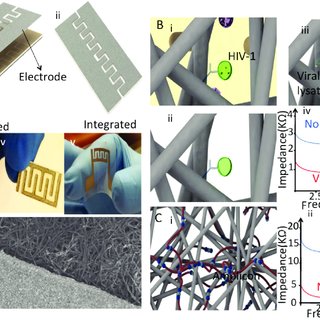 At that first point, the cellulose-based paper is economical, shows great promise as a biodegradable substrate to be used in disposable Electronics and is an easy-to-access agent throughout the world. The cellulose-based paper is capable of retaining fluids through capillary forces and provides a high surface area to volume ratio making it appropriate for restoring a variety of reagents to implement bioassays. Recently, the cellulose-based paper has been employed as a substrate to develop a flexible capacitor. Silver nanowire ink was printed on the surface of the cellulose-based paper whose capacitance was evaluated and measured for distinct applications. More interestingly, graphene can also be employed to fabricate a supercapacitor capable of increasing the sensitivity of inflexible paper microchip capacitor-based biosensors. In the newly developed essay, a paper microchip along with graphene-modified silver electrodes has been fabricated in order to detect and capture HIV on-chip. The results prove that electrode material and its geometry are capable of influencing the performance of the paper chips in detecting diluted samples, viral lysate and electrically conductive samples. In the case of adding graphene into silver, a more sensitive material is provided for capacitance measurement diluted samples on paper chips. The microchips based on cellulose paper have been evaluated in diluted HIV spike samples electrical signal of the viral lysate samples on-chip that has shown to be different than HIV free control samples.

The conventional methods for detecting HIV are principally based on either direct molecular recognition of HIV as well as its components including some particular nucleic acid sequences and antigens or detection of antibodies percentage created by an infected patient of HIV. Even though these diagnostic methods are deemed to be highly sensitive and ranked as user-unfriendly agents, they require the application of some sophisticated instruments and highly-trained personals. What’s more, conventional HIV tests is not able to detect acute HIV infection because of the presence of a relatively Long window. For instance, HIV testing based on antibody has a window period of nearly three to six weeks after the infection when antigen testing produces the window period down to 16 days. On the other hand, testing based on nucleic acid shortened to detection window to nearly twelve days. In order to reduce the window. Despite shorter detection of HIV at earlier stages of viral infection, there has always being a need to develop fast and highly sensitive HIV-1 protease detection platforms. The studies suggest the newly-developed platforms based on graphene oxide with fluorescence mechanism and cellulose paper can practically cut the period window of HIV-1 detection.