Cubic boron nitride is advertised as an analogous material to the world famous carbon allotrope diamond. In terms of mechanical strength, the resemblance is uncanny. In addition, cubic boron nitride shows advantageous electrical, optical, and chemical properties. These desirable properties are commonly utilized in mechanical and electronic applications.

Boron Nitride (BN) is a popular inorganic compound capable of showing different forms and properties. Similar to many other inorganic compounds, BN has found an important place in the world of chemistry. However, the potential of BN was discovered later in history compared to other inorganic compounds such as oxides of boron and iron, chlorides, or ammonia. This delay could be attributed to the fact that BN is not found in nature and actually obtained in the laboratory environment. BN was first produced at the beginning of the 18th century. However, its commercial use did not start until the 1940s. Since then, it is widely produced and utilized in different industries.

Boron nitride attracts attention due to its electronic comparability to the world-famous element carbon. Much like carbon, BN shares the same number of electrons between neighbouring atoms. Furthermore, BN takes on similar structural properties to carbon. A surprising equivalence between different phases of BN and phases of carbon based materials is observed. BN products can exist in several different phases including amorphous (a-BN), hexagonal (h-BN), turbostratic (t-BN), rhombohedral (r-BN), monoclinic (m-BN), orthorhombic (o-BN), wurtzite (w-BN), and cubic (c-BN) phases. Amongst the different polymorphic forms of BN hexagonal boron nitride (h-BN) and cubic boron nitride (c-BN) attract the most attention due to their stability, similarity to different phases of carbon based materials, and desirable properties. Hexagonal boron nitride is often associated with graphite-like carbon based materials while c-BN is often associated with the diamond-like carbon structure. The first samples of c-BN were produced from hexagonal boron nitride using high pressure and high temperature process in the presence of catalyst in 1957. After this discovery, much more sophisticated production methods have been developed for the production of c-BN. But, commercial availability of c-BN was not obtained up until 1969. Since then, desirable properties of cubic boron nitride have been utilized in several different industries. 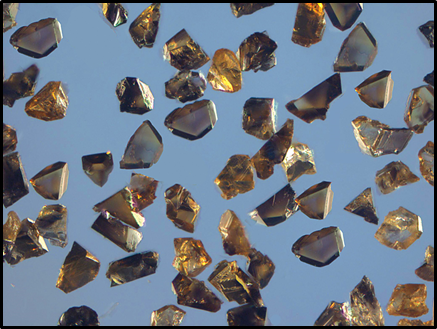 The diamond-like allotrope of boron nitride shows several different attractive properties. The most striking property of c-BN is definitely its mechanical strength. It is one of the hardest materials on the market, second to diamond. The hardness of c-BN is reported as 4500 kg.mm-2 which is quite close to that of a diamond (6000 kg.mm-2). Similarly, Young’s modulus and Bulk modulus (800–900 and 370–385, respectively) of c-BN is comparable to that of a diamond (920–1100 and 380–440, respectively). This is due to its comparable cubic structure to diamond. The cubic structure of c-BN is classified as zinc blende which refers to a diamond-like structure with two different base atoms. Such structure is commonly observed in III-V cubic semiconductor materials including GeAs, InAs, or AlsAs. Similarly, c-BN is known to be a good III-V semiconductor as well as the lightest one in that group. As a semiconductor c-BN shows a wide band gap of 6.1-6.4 eV which increases with the increasing pressure involved in the production process. In addition, c-BN is identified as a direct gap insulator. Cubic boron nitride also attracts attention with its high thermal conductivity which comes second on the list after diamond. The impressive predicted value of c-BN thermal conductivity is around 1300 W/mK. Furthermore, c-BN shows relatively low dielectric constant, exciting optical properties and chemical inertness. This material does not react with ferrous metals even at high temperatures. From an optical point of view, c-BN shows good transmittance over a wide spectral range from UV to visible. Dissimilar to diamond, c-BN can be doped with p- and n-type impurities which could affect its electrical properties and allow manipulation. All of these attractive properties and its similarity to diamond make c-BN a desirable material in several different industries and applications. Currently two different types of c-BN products are available on the market; dense or porous polycrystalline c-BN. Depending on the application area, one or the other is preferred.

What are the Applications of Cubic Boron Nitride?

Similarly, c-BN is utilized in cutting operations. To be used in cutting operations, c-BN requires sintering which could be done in two different ways. It could be sintered during the conversion process from h-BN or could be sintered after production. Due to the strong bonding in its structure and its stability at high operating conditions, sintering c-BN is not an easy process. High pressure, high temperature, and sintering agents are usually involved in the sintering of c-BN. Pure polycrystalline c-BN or polycrystalline c-BN sintered with a binder phase can be utilized in high wear abrasive applications. Pure c-BN shows better hardness values; however, binders are also utilized in the industry. One of the most common uses of c-BN in cutting applications involves incorporating c-BN powder onto tungsten carbide or ceramic substrates.

Aside from its mechanical properties, the electronic properties of c-BN also attract significant attention. Cubic boron nitride is known to be the lightest III-V semiconductor. It is utilized as a good insulator due to its wide band gap. Along with a wide band gap, c-BN also have one of the highest thermal conductivity which allows it to be used as a heat sink in semiconductor lasers, microwave devices, and LEDs emitting light at a wide spectrum. To be used as a heat sink, c-BN products are commonly coated with group VIII metals or aluminium.

Cubic boron nitride is also utilized to obtain p- and n-type semiconductors by doping with silicone and beryllium. These semiconductors are utilized to produce p-n junction diodes able to work at even high temperatures. Such junctions are used in many applications including UV sensors. Electronic applications of c-BN are still at the start of their journey, further development of material technology and application techniques is expected to increase the share of c-BN in the electronic industry. Cubic boron nitride could be a potential solution to the dire need of smaller, thermally conductive, and insulating materials in electronic devices.

Boron nitride has attracted a lot of attention as a synthetic inorganic material due to its resemblance to carbon-based materials. The most studied phases of BN are often associated with allotropes of carbon materials. In this context, cubic boron nitride is equated to diamond which is arguably the most attractive form of carbon. Similar to diamond, c-BN shows great mechanical properties and comes second to diamond in terms of hardness, Young’s modulus, and bulk modulus. The advantage of c-BN over diamond is the chemical inertness of c-BN against ferrous metals even at high temperatures. This is why c-BN is utilized for abrasive applications such as cutting, milling, and grinding operations. Cubic boron nitride is also a desirable material for electronic applications due to its wide band gap, insulating properties, and high thermal conductivity. It is used as a heat sink in semiconductor lasers, microwave devices, and LEDs. Furthermore, Si or Be doped c-BN can be utilized as p-n junction diodes. The optical properties and electronic properties of c-BN are also utilized in UV sensors. Evidently, cubic boron nitride is a promising material due to its superb mechanical properties, wide band gap, low dielectric constant, exciting optical properties and chemical inertness. Its industrial applications are still in their infancy; however, its potential for further development is promising.