With the rapid developments in the electronics industry and constantly advancing electrical products, one of the most important material properties of 21. century has become electrical conductivity. Considering that most of the products we use today such as batteries, energy generation systems, electrical circuits, sensors, and so many others utilize conductive materials, further improvement in this area has utmost importance.

Metals, known for their high electrical conductivity, were the material for electrical improvement in the early stages. But soon enough, solutions providing better conductivity were required. This is where carbon came into play. Carbon allotropes can show a wide range of electronic and charge transfer properties based on the arrangement of carbon atoms and the interaction between them. For example, the well known carbon allotrope diamond shows very low electrical conductivity because of its sp3 covalent bonds between carbon atoms. However, a number of different carbon based materials can show high electrical conductivity or semi-conductive properties. Carbon based materials that are known for their unique electrical properties are carbon black, carbon nanotubes (CNTs), graphene, and graphite. These materials can be used in various application areas and show different electrical properties.

The roots of carbon black go back to soot or black waste of gas/oil lamps. Soot is formed by the incomplete combustion of hydrocarbon materials and contains various elements in addition to carbon. On the other hand, carbon black is produced through the complete combustion of hydrocarbon gasses or oils. Hence, it shows consistent and reproducible properties. Most of the commercially available carbon black materials are produced through two different manufacturing processes: furnace and thermal. According to the production process carbon black can also be referred to as furnace black or thermal black. The furnace black process is the most commonly used process of the two. This process uses heavy oils as raw material. Heavy oils are vaporized and pyrolyzed in a hot gas stream to produce carbon particles which are cooled and collected in bag filters. The effluent gas of the reactor contains several gasses such as carbon monoxide and hydrogen. On the other hand, the thermal black process uses natural gas as raw material. The hydrocarbon content is decomposed in furnaces to carbon black and hydrogen in the absence of air. The resulting carbon black from both processes usually contains 97% elemental carbon. Even though these processes are heavily utilized in the industry, some production methods also use acetylene as the raw material, in which case carbon black is often referred to as acetylene black.

Carbon black is a semi-crystalline material made up of carbon fractal aggregates. These building blocks are nanosized stacked layers of carbon sheets, much like graphene sheets, with random orientations. The random structure of carbon layers ensures high charge transfer throughout the material. Carbon black is a popular material in the industry because of its specific surface area, nanosized particles, high electrical conductivity, structural strength, 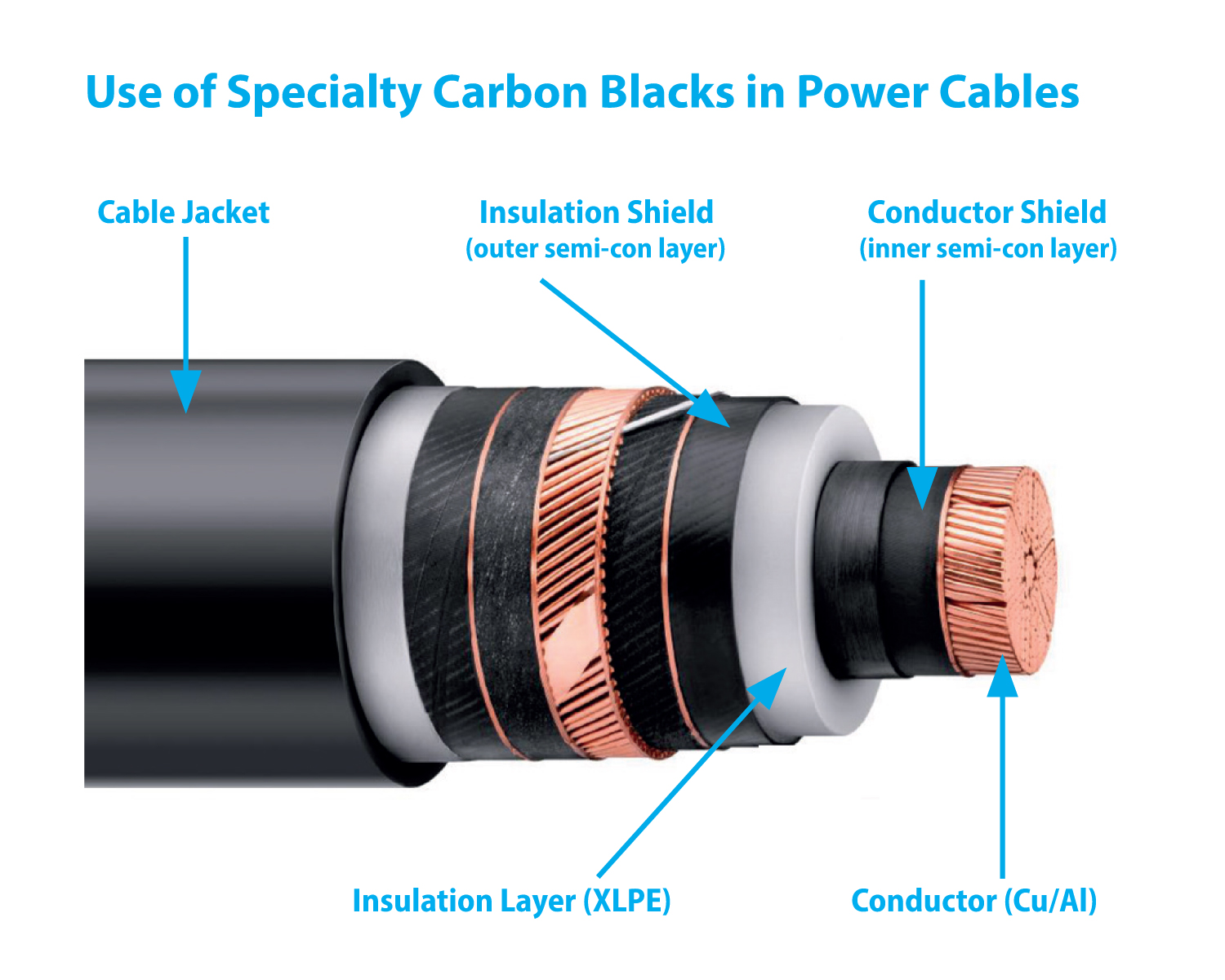 Acetylene black is a type of carbon black obtained from the pyrolysis of acetylene. Since it is produced through the thermal decomposition of acetylene without any use of air, it is known to have high purity. Contrary to KETJEN BLACK and C-NERGY, acetylene black does not have a voided structure. This product attracts attention with its high electrical conductivity which stems from increased crystallization.

Graphite is another material that attracts attention with its high electrical conductivity. Furthermore, graphite is an abundant material found readily in the Earth’s crust. Three different kinds of graphite can be found in nature: crystalline, amorphous, and flake graphite. Crystalline graphite is the most commonly mined type of graphite. Though the term amorphous is used for the amorphous graphite, this naming is deceptive. All graphite types are crystalline but amorphous crystalline can seem amorphous to the naked eye because of its anhedral structure. However, amorphous graphite still shows high electrical conductivity, chemical stability, and structural strength. Flake graphite is found in trace amount in other mineral sources. Producing graphite powder consisting of graphite particles at the nanoscale is a relatively easy process. Most of the manufacturing methods involve mechanical processes that provide decreased and homogenous particle size. Graphite has a layered structure where each layer is composed of a network of hexagonal carbon structures. Carbon in the hexagonal unit and at the same graphite layer is bonded with covalent bonds while graphite layers are bonded through Van der Waals forces with each other. The interplanar spacing of graphite flakes is usually around 0.66 nm.

Carbon nanotubes (CNTs) can be described as rolled-up graphene sheets. These carbon based structures are known for their mechanical strength, high surface area, chemical stability, and high electric and thermal conductivity. Furthermore, the two dimensional structure of CNTs is desirable for various application areas. The electrical conductivity of CNTs is highly dependent on the structural properties and production methods. Both bottom-up and top-down methods are utilized for the production of CNTs. The most commonly used methods for mass production of CNTs are arc discharge, laser ablation, and chemical vapour deposition (CVD). CNTs have become a promising highly conductive material with the development of high-yield mass production systems. Thanks to these production systems, CNTs can be obtained at lower prices and compete with the other conductive materials in the market such as carbon black.

Single walled carbon nanotubes (SWCNTs) can be of metallic or semi-conducting nature depending on the graphene sheet arrangement. Similarly, multi walled carbon nanotube (MWCNT) conductivity depends on the production method and arrangement of the graphene layers. CNTs show three different structural orientations which are chiral, zigzag, and armchair. In the armchair orientation, hexagonal units are lined up parallel to the axis of the nanotube. CNTs that show this type of orientation show metallic electronic properties and provide high electoral conductivity. In the zigzag configuration, hexagonal units are lined to create a circle around the nanotube. If hexagonal units do not follow any line due to a twist in the nanotube structure, this orientation is called chiral. CNTs showing zigzag or chiral configuration show semi-conductive properties and require external energy such as light or electric field to be able to show conductivity. Another factor that affects the electrical conductivity of CNTs is the impurities or structural defects on the CNT structure. Impurities and structural defects can decrease the electrical conductivity of CNTs. This is why studies show that annealing has a positive effect on the CNT conductivity. Although this seems to be a negative or undesired property, the sensitivity of CNT conductivity allows scientists to manipulate the material properties to serve the application purpose.

Conductive materials have become one of the most important products of today’s technology because of the increasing interest in electrical systems. As new electrical devices are developed the need to develop more sophisticated electrical systems becomes more and more critical. Carbon based conductive materials offer potential solutions and novel ideas for further improvement of technology. High electrical conductivity, surface area, thermal conductivity, and desirable chemical properties of these products make them great candidates for the job. Carbon based conductive materials such as carbon black, carbon nanotubes, graphite, and graphene are utilized in several different applications including conductive inks, batteries, renewable energy systems, conductive polymer composites, and electrochemical sensors.

The most explored application area of carbon-based conductive materials is battery technology. With the increasing energy demand of electronic devices and electric cars, batteries providing better performance and density have become critically important.

Carbon-based conductive materials are especially utilized as additives in Li-ion batteries. These batteries dominating the energy storage industry suffer from low energy densities, poor cycle life, and heating. One of the reasons for inadequate battery performance is the low electrical conductivity of cathode materials such as LiCoO2, LiMn2O4, LiFePO4 and Li(Ni1/3Mn1/3Co1/3)O2. Incorporating small amounts of conductive materials throughout the cathode matrix is proven to enhance battery performance and cycle stability by facilitating charge mobility because of their high electrical conductivity. Also, the high thermal conductivity of carbon based nanomaterials can be advantageous for the thermal management of Li-ion batteries. Furthermore, CNTs can help reduce volume expansion and dendrite formation which improves the battery cycle life.

Even though most studies focus on the use of conductive carbon materials in cathodes, there are also some studies that utilize conductive materials for the improvement of anode formation.

Polymers are one of the most important industrial materials because of their wide range of properties. Today, polymers are used in various areas from aerospace to home appliances. These interesting materials also serve as a great matrix or carrier in composite materials. An interesting polymer composite attracting great attention is conductive polymers. These composite materials are used in thin film transistors, supercapacitors, solar cells, polymer light emitting diodes (LEDs), corrosion resistance, electromagnetic shielding, biosensors, chemical sensors, molecular electronics, supercapacitors, and electrochromic devices.High surface area and electrical conductivity of conductive carbon materials attract attention for achieving high performance conductive polymers. Furthermore, these conductive materials show better dispersibility than metal additives.One of the most important factors to consider for conductive polymers is the percolation characteristic of the composite conductivity curve. Because of the percolation phenomena conductivity shows an S-shaped behaviour which means that at a certain limit even a small change in conductive material content in the polymer matrix drastically increases the composite conductivity. Since as the amount of conductive filler increases the production processes become more complex and the price increases, determining this percolation threshold is important. The percolation threshold is affected by several different factors including viscosity and polarity of the polymer, the degree of crystallinity of polymer and, type, structure and porosity of conductive filler. Studies show that carbon based conductive materials showing high porosity provide lower percolation thresholds. Also, the high structure is advantageous for carbon black additives.