The development of Nanotechnology has also increased the growth and development of Nanocalcite, which is an element or material that helps to restore and improve various industrial areas such as pharmaceuticals, dentistry, and more. At this point, it is important to understand the definition and scope ofNanocalcite. It is the term used to describe a chemical compound represented by the formula CaCO³ which comprises three vital elements, that is, carbon, oxygen, and calcium.

This parent element of nanocalcite that is calcium carbonate is situated in rocks especially as limestone, contributes to the hard covering of snails, turtles and other marine animals. They also form a major part of coal balls, eggshells, and similar objects. Calcium carbonate exists in various shapes and sizes depending on a wide range of varieties. In the human body, scientists have found calcium to be of great use in combating several diseases, such as osteoporosis. However, they cannot be resolved by nanotechnology. Each of the elements making up CaCO³ can organize themselves in various ways forming various calcium carbonate minerals. The commonest form of these is the hexagonal form of calcite. Again, the hexagonal form can appear in various crystal forms including prismatic, scalenohedral, rhombohedral, and the aragonite, which is less common as it has a hidden needle or orthorhombic crystal morphology. Another rare form of the calcium carbonate is the vaterite mineral which is not stable in terms of structure.

The United States’ FDA (Food and Drug Administration) has categorized the element as Generally Recognized as Safe (GRAS), as long as it fulfills specific demands or modalities. In dentistry, the element can be consumed as a direct or indirect food additive or as drugs. Notwithstanding its wide usage, it is important to note that the substance is regulated by various international and domestic laws in relation to general health and safety.

Historically speaking, nanocalcite has been the product for commercial purposes for decades, specifically since the 19th century. It was first produced in the United Kingdom where the leftover calcium chloride from the manufacturing potassium chlorate was treated with soda ash and CO2 to produce the “precipitated chalk”. Later on, in the same century, a new production company was established that used another process called “milk of lime“. Currently, the system forms part of the Performance Minerals group (PMG). Production began in 1938 in the United States of America, when a company, C.K. Williams commenced with the production of PCC using mine based limestone. The company was later acquired in the century and joined the PMG of SMI in 1992.

Nanocalcite is generally produced through the “milk of lime” process. The process involves the direct carbonation of a watery lime.

2. The rock is then broken into smaller pieces required for processing

3. The impurities should be separated from the broken rocks.

4. The purity rocks are then heated at 1850°F in a kiln, which separates the calcium carbonate, CaO, and CO2. CaCo3+heat=CaO+CO2

5. The resulting lime is then added to a small amount of water forming calcium hydroxide.

6. Other impurities are then separated from the mixture.

7. Obtained carbon dioxide is added to the lime resulting in the Reformation of an insoluble calcium carbonate which evaporates out.

8. Again, other impurities are separated. Although, the process appears easy in laboratories, producing in large quantity for commercial purpose can be very difficult as it involves a lot of processes to arrive at the required shape, size, surface area, and chemistry.

As stated earlier, nanocalcite is produced from limestone (a high purity calcium carbonate rock). The limestone mineral is a combined result of a thick layer of sea animal shell coverings and skeletons lying at the sea bed, most of which are made up of calcium carbonate. For centuries, the deposit was subjected to extreme temperature and pressure resulting in its transformation to a high purity calcium carbonate. Through the process of diagenesis, all the impurities or organic matter were separated. The prolonged continuation of the process results in the formation of crystals. Metamorphosis takes place at reduced temperature. The various shapes of nanocalcite make it functional in various areas such as adhesives, plastics, nutritional supplements, etc. 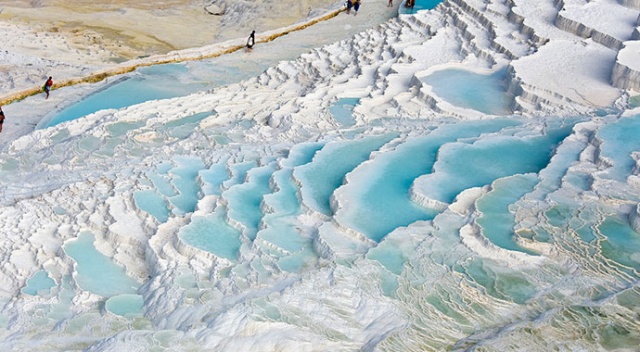 Hierapolis (Pamukkale) Travertine terraces in Turkey are rich of Limestone.

Let’s come to the main point that is the uses of Nanocalcite:

Nanocalcite is widely used in the production of industrial paints and plastics due to its unique characteristics. Its use in chemical, biological and industrial areas is widely increasing as scientists are working towards making more discoveries with the element. Each of these applications will now be discussed.

The plastics industry is the primary facilitator increasing the demand for nanocalcite. The development of the plastics industry is expected to widely improve the demand for the product. It is a well-known fact that the plastics industry all over the world depends largely on fillers, additives, and other augmentations to improve and increase the characteristics of the finished product. In polymeric materials, the product is utilized as a filler to boost its resistance. The product is equally applied on a large scale in plastisol, silicones, PVCs, polysulfides, and poly propylene. New applications in the industry have resulted in exponential growth of the commercial market.

It is used as a raw material in the production of sealants and adhesives. The sporadic development in the building industry is yet another factor affecting the increasing demand for the product. In other industries, specifically, the rubber industry, the product is applied on chloroprene rubber and other forms of rubber. This application aids improvement in stability and firmness as well as a reduction in the cost of production. Rubber is commonly used in the production of tubes, wires, belts, foot wares, and tires. Its application in the building sector boosts durability of finished products and tops up their mechanical properties. Particles help to improve cement wetness through its chemical effect. Nanocalcite equally plays a vital function in the production of adhesives.

Biological and pharmaceutical applications of Nanocalcite

Nanocalcite as a Drug Carrier

Research development in the area of nanocalcite has witnessed the creation of various pharmaceutical products made up of nanocarriers like polymeric and hydrated NPS. NPS provides a lasting solution to the issue involved in the drug delivery system by improving absorption characteristics, solubility while enhancing shelf-life. The results of these include improved therapeutic effectiveness and safety matrix.

One of the major difficulties in dentistry is the challenge of preventing tooth decay as well as cavities treatments which is an irony of the main essence of dentistry, that is the early prevention of tooth diseases. In spite of the overwhelming efforts in the promotion of oral health, the prevention process continues to be a major challenge. Dental caries, for instance, is caused by bacteria on the surface of the tooth. The formation of the disease is a combined effect of bacteria producing acid and other factors like teeth and saliva. Once it is exposed to fluids, a coating is formed immediately on the solid areas of the teeth.

Based on the experiment, it has been concluded that toothbrushing with nano calcium carbonate paste can have a tremendous effect on the restoration of the surface layer of the tooth. Brushing with this Nanocalcite based toothpaste alone for about ten to fifteen minutes impacts significantly on the surface area.

In an experiment carried out to ascertain the difference a local toothpaste and a nanocalcite toothpaste, significant differences were drawn between both materials especially in the last two segments of the brushing process. Roughness in the surface area witnessed a wide increase in one month of brushing. The surface roughness of the ionomer planes that was brushed with nanocalcite toothpaste produced a greater result.

Due to the size and property, nanocalcite have proven to have good retention on the surface of the tooth. They function as vehicles for a steady release of high purity solutions of calcium ions into the oral fluids. They equally have the ability to increase the PH of oral fluids. Due to its solubility, calcium carbonate fluoride can be ingested by incorporation in apatite. Rinsing of the mouth with nano calcium carbonate fluoride serves as a means to tackling dental caries by increasing the fluoride concentration or PH of the saliva, thus, boosting demineralization of the tooth.

Nancalcite can also be used in the treatment of periodontal disease. In an experiment carried out on a patient suffering from the disease, nanocalcite was used to prevent the loss of bone by its application. Nanocalcite toothpaste or mouthwash left to remain on the tooth steadily removed the organic particles and prevented the accumulation of impure substance. However, these materials are disabled when swallowed.

Nanocalcite as Alloys and Catalysts

Nanocalcite can be used as industrial alloys and catalyst in the bonding of metals such as aluminum and beryllium.

The functionality and importance of nanocalcite in the production or formation of mortar cannot be ignored. It has been shown through experiment that nanocalcite can help to strengthen mortar due to the fast development of hydrated materials as incited by nanocalcite. Mineral admixtures like FA can enhance the performances of concrete. Owing to the presence of silica, and aluminum oxide, FA combines with CH which forms CSH and CAH. These products fill up the pores forming an indice, which improves the strength of the concrete.

Through the effects of seeding, nanocalcite has the ability to enhance the mechanical performances of FA concrete. It has been suggested that the surface addition which nanocalcite provides for nucleation of the above-mentioned products is the root cause of the observable growth. Chemically, monocarbonate crystallization is made possible by nanocalcite. It equally reacts alongside tricalcium silicate and results in calcium carbosilicaye hydrate. The result of this is the appearance of NC having a tremendous effect on cement hydration which improves strength and durability. It has been discovered that temporary strength of FA based concrete greatly improves through the addition of NC.

In conclusion, it is apparent through the above discussion that nanocalcite has a great number of uses not only industrially but biologically, medically and pharmaceutical. Its functionality in the industrial sector has helped improve the manufacture of a wide variety of plastics, rubber, etc. As stated earlier, new applications in the industry has led to the tremendous growth of the commercial market globally. In dentistry, nanocalcite plays a vital role in the permanent elimination of tooth diseases and restoration of surface area of tooth and the PH of oral fluid. The substance is of great importance for pharmaceutical and medical application.