USE OF GRAPHENE İN SOLAR CELLS

Scientists have developed graphene films lower than 10 nanometers in thickness, that’s 30 atomic layers. They are atomically smooth and could be used in the future as a substitute for indium tin oxide. Indium tin oxide is used in solar cells as a transparent electrode, in which the generated current is tapped, similar to the electrical pole of a battery.

Although indium tin oxide has the ideal combination of electrical conductivity and transparency needed for electrodes in solar cells, it has some disadvantages as the indium raw material is limited and is becoming more expensive, and the fabric has a surface roughness. This article discusses the use of Graphene in Solar cells and all relevant aspects in detail.

Why Graphene is suitable for Solar Cells

Graphene prevents high local electric fields, which hinder the electric transport of charge on the surface. Graphene also makes solar cells more efficient. Unlike the traditional indium tin oxide, it is also transparent to a certain portion of the infrared sunlight, which accounts for about half of the solar radiation on Earth. The electrodes made of graphene have a lot of advantages. For testing purposes, the scientists have already built the first solar cell with graphene.

Moreover, in conventional semiconductors, such as silicon or gallium arsenide, a freely moving electron is created for each absorbed photon. However, this only absorbs part of the energy of the photon, the rest heats up the crystal lattice of the semiconductor as heat energy. But Graphene has the capacity to overcome this issue.

But, what is Graphene?

Graphene is a material that is mainly characterized by its hardness (comparable to diamond) and is composed of a monoatomic layer of carbon atoms, which means that it has a thickness equal to a single atom. It is formed when the carbon particles are grouped in a densely hexagonal sheet. It is the strongest available material on earth.

Graphene is primarily obtained by chemical synthesis in the laboratory from a natural material that is graphite or a mineral that represents one of the allotropic carbon states. The structure of graphene is usually formed by hexagonal cells, as the end of its name also suggests, and, in the presence of deficiencies, the cells can have other forms, such as a pentagon or a heptagon. Graphene has some excellent qualities of semiconductors, and in 2012, it was integrated into the transistors of IBM. 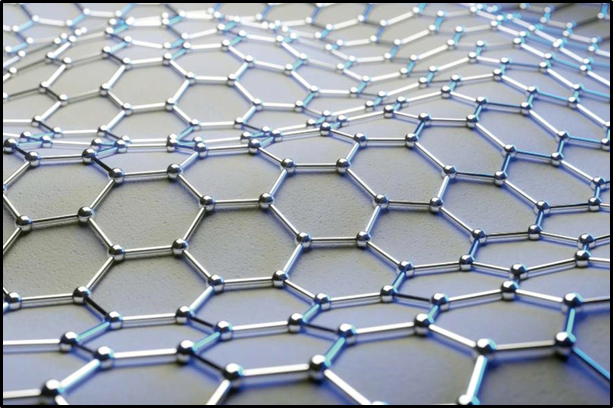 Research in the department of science and technology of innovative materials at the Michigan Technological University is investigating the characteristics of a new material with which to build new, more efficient solar cells. This is graphene that could increase the conductivity of each individual panel by 52% compared to the current one.

The research was presented in the academic article “Promoting Effect of Graphene on Dye-Sensitized Solar Cells“. The use of graphene in photovoltaic technologies should be strictly considered with thin film and silicon modules. The thin-film solar module is treated with titanium dioxide dye, it has the characteristic of being the semiconductor of the system that activates the photovoltaic effect. Research has shown that with the addition of graphene to dioxide, the conductive capacity increases, increasing up to 52.4%.

Yun Hang Hu, professor, and leader of the research group explains: “The excellent electrical conductivity of graphene sheets enables them to act as bridges, accelerating the transfer of electrons from titanium dioxide to the photoelectrode”.

The technique for the production of this particular compound was developed by the team and, in principle, it does not seem difficult to understand but what is difficult is to implement. It’s about creating titanium dioxide sheets integrated with graphene. The first operation consists of reducing the graphite oxide powder which must be mixed with titanium dioxide to form a homogeneous paste. Finally, the mixture must be distributed on a substrate, which can also be simple glass and heated at high temperature.

Also, from the statements of Yun Hang Hu: “It is cheap and very easy to prepare, and if too much graphene is used, it will absorb light from the solar cell and reduce its efficiency “. In reality, this is the risk, therefore, the research group is required to find the right proportions between the two materials, so that the final properties are balanced.

Use of Graphene in Solar Cells: Research by Helmholtz-Zentrum Berlin (HZB)

The research on the use of Graphene in Solar cells was also conducted in parallel by another group at Helmholtz-Zentrum Berlin (HZB) in Berlin for silicon photovoltaics. In this case, the researchers first noticed the intrinsic characteristics of graphene, i.e. hardness and transparency.

After some laboratory tests, the result was that the use of graphene in a photovoltaic panel is perfect in terms of lighting conversion and, consequently, energy efficiency. In this case, the researchers reproduced a thin-film photovoltaic module in the laboratory based on graphene but with a copper substrate. There were two different versions, the first with an amorphous structure and the second one with a polycrystalline silicon layer. The result was that graphene kept its properties unchanged, despite the fact that the modules composed were totally different.

Norbert Nickel, one of the researchers, explains: “The result is something we didn’t expect to find, which shows that graphene is still graphene despite being coated with silicone”. Measurements of vector mobility show that the mobility of charge carriers within the embedded graphene layer is about 30 times greater than that of traditional zinc oxide-based layers.

Graphene, a material introduced for the first time by the University of Manchester in 2004, has the characteristic of being hard as diamond and at the same time, to be considerably thinner and lighter. Graphene is a material composed of carbon atoms, particularly resistant but also very flexible. At the chemical level, it is inert and very flexible. In summary, this “wonderful material”, which has been used for a long time in photovoltaic applications, is now an ideal component for solar cells, which allow storing the excess electricity produced by a photovoltaic system and put it on the network, if necessary.

The idea of using Graphene in Solar Cell came directly from its “discovery”, where a team of researchers from The University of Manchester, worked on a project, named as ” Graphene-based electrodes for electrochemical energy storage”.

The research is still in its infancy, because, at the moment, it is a question of verifying its feasibility. The question that must be answered first, in fact, refers to the compatibility of graphene with other materials used in the construction of solar cells and storage systems. The team’s research began from lithium ions (which are often produced by the anodic material inside the batteries) and from the analysis of the transmission speed of electrons through the new and possible graphene batteries.

Right now, the Manchester team is verifying the possibility of using graphene  in photovoltaic storage systems. But once a solution has been found, the goal will be to extend the use of batteries to supercapacitors. These particular electric capacitors are, in fact, able to accumulate small amounts of energy, compared to batteries and smaller and more extended storage systems, but with greater durability and power. The market, therefore, would be that of electric cars, which, in combination with graphene batteries, could give the decisive push that has been sought for a long time.

Moreover, the University of Manchester is not the first one to take this path. Already in 2011, the American researchers of Nanotek Instruments published in the scientific journal “Nano Letters“, the first results of a survey that involved the use of graphene electrodes to improve the energy storage systems of electric vehicles, sources of renewable energy and smart grid applications.

Also, in this case, the studies referred to the interaction of graphene with lithium ions, showing that they are able to capture lithium ions quickly and reversible. The fact that the American results have are so promising is certainly an advantage for the new studies at the University of Manchester.

To deal with the fluctuations of the climate according to the geographical zones in which we are, and which can affect the yield of the solar panels, Chinese scientists have developed photovoltaic panels able to capture the energy of the sun, but also of the rainwater.

Indeed, in the United Kingdom, it rains on average 42% of the year and the yield of the solar panels is not the same as in Sicily for example. So, Chinese researchers Qunwei Tang, Xiaopeng Wang and Benlin from Ocean University of China and Peizhi Yang from Yunnan Normal University have developed new photovoltaic panels that can generate energy when the climate does not allow it. It is generated with rainwater that strikes the panels.

What makes the difference is the graphene, intended to solve the energy crisis. It is a very conductive two-dimensional material, able under the effect of water to bind positive ions with their electrons. Here, it is the impurities of the rainwater, more precisely the salts, which are determining in the process, dissociating themselves in negative and positive ions. As soon as they reach a sufficient quantity, they bind to graphene in order to produce an electric current.

At the moment, if the invention is destined to be developed for commercial purposes, its production is hardly feasible because of the high cost of producing graphene, the discovery of which has earned physicists Andre Geim and Konstantin Novoselov a Nobel Prize in Physics in 2010.

To recapitulate, Graphene is the ideal material to be used in Solar Cells due to its high conductive capacities, which are superior to those of copper. It has a transparent appearance and remarkable plastic qualities. Therefore, it is the number one candidate to replace the widely exploited silicon. Graphene consists of a layer of carbon-hybrid atoms in hexagonal form. It is obtained in the laboratory from the treatment of graphite crystals by means of a solution based on sulfuric acid and nitric acid, oxidized and exfoliated by SOCl2 treatment and transformed into acyl chlorides then into amides to obtain graphene, soluble in dichloroethane, tetrachloromethane, and tetrahydrofuran.

Therefore, the excellent characteristics as a material with high conductive capacity make graphene the absolute protagonist of intense study programs for the construction of Graphene-based Solar Cells. The current researches on its use in Solar cells will further discover all the relevant aspects.