Both 3D printing and nanotechnology often join forces to provide novel structures and application methods. Nanomaterials are utilized to enhance the features of printed materials such as electrical conductivity and sensing properties while 3D printing technologies are utilized to obtain nanosized structures that are not feasible by any other method.

What Is the Charm Of 3D Printing?

Up until the 1980s, the general manufacturing approach of materials engineering has relied on “top-down” techniques. This technique is based on obtaining the desired shape by reducing the size of initial bulk material such as cutting marble. This is a well-known ancient technique to build tools, accessories, and other 3D materials. However, an important disadvantage of this technique is the waste of material since most of the bulk material is cut out in useless shapes. The “bottom-up” technique provides a great solution to this problem. This technique is the opposite of the top-down approach in which the material is built from scratch by adding layers on top of each other. It uses just the needed amount of material for the desired structure reducing the waste drastically. 3D printers work based on the “bottom-up” approach depositing the molten material layer-by-layer onto a substrate. Hence, 3D printing is also referred to as “additive manufacturing” which is possibly a much more suitable term for this application. Besides the upper hand on the waste material problem, 3D printing also makes it possible to construct intricate structures with precision. Another compelling feature of 3D printing is design flexibility. Designers now have the freedom to create many detailed structures thanks to the ease of operation of 3D printers defeating the physical challenges of conventional techniques. 3D printing is widely utilized polymer, plastics, and ceramic materials. 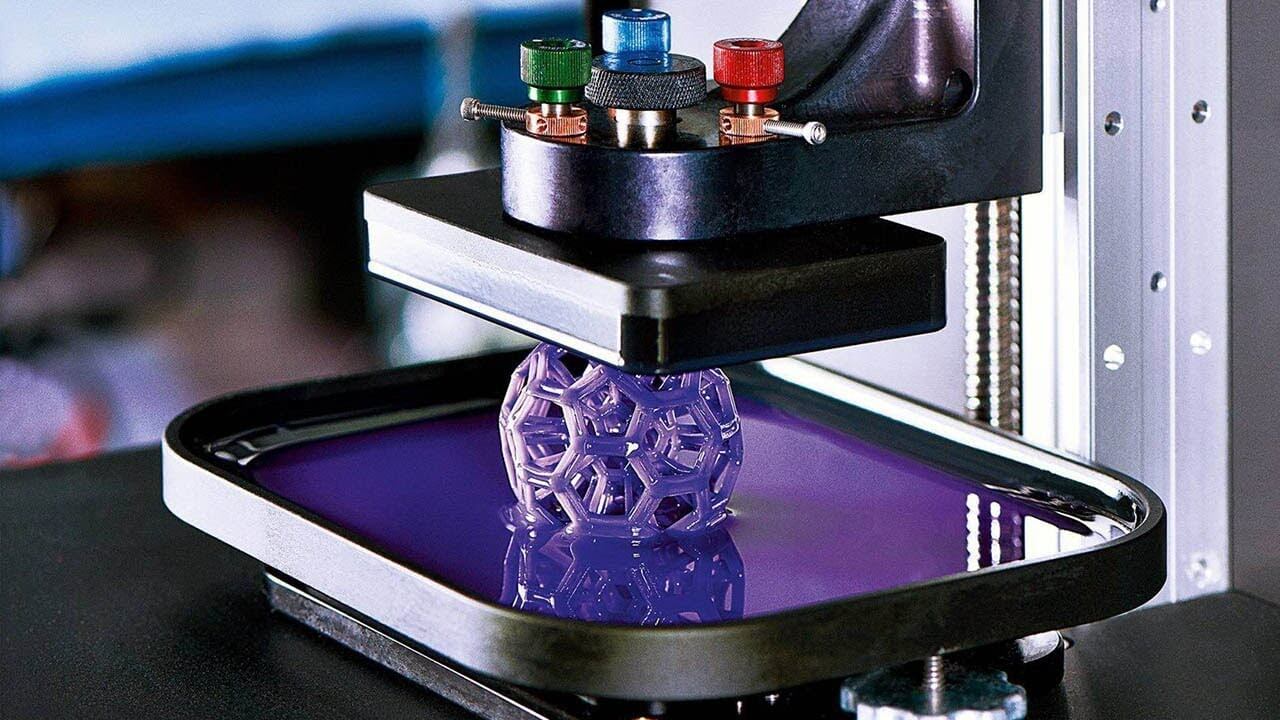 The Role of Nanotechnology in 3D Printing

These intriguing features of 3D printers have also attracted the attention of nanotechnology. In 3D printing applications, nanotechnology can either be used for producing nanoscale structures or incorporating nanomaterials into the main material.

Focused electron beam induced deposition (FEBID) is a direct-writing method capable of constructing complex 3D nanostructures. In this method, a gas precursor is adsorbed on the substrate and then dissociated by focusing the electron beam onto it. This allows layer by layer construction with layers only one-atom-thick.

Two-photon lithography (TPL) utilizes photosensitive materials (photoresist) and highly localized femtosecond laser radiation in the infrared region. The high peak intensity at the focal point allows the simultaneous absorption of two photons. This interaction induces a polymerization or depolymerization reaction of the photoresistive material. The two-photon approach reduced the resolution of 3D structures down to 150-50 nm which is smaller than any other technology. Through translating the point of focus within the resist, almost any type of 3D structures can be obtained. In this method, polymers can be used to build 3D nanostructures as well as metallic compounds inappropriate media. Two-photon lithography eliminates the restrictions of the layer-by-layer process and allows embedding and connecting objects in 3-D.

Click Image to Learn More About 3D Printing and Nanotechnology

In addition to creating 3D nanostructures, 3D printing utilizes nanotechnology in the precise deposition of nanocomposites. Conventional techniques such as chemical vapor deposition for the application of nanocomposite materials have the disadvantage of wasting material and the lack of precision. Compared to conventional methods, incorporating nanomaterials to the conventional host matrices is a cost-effective, environmental, and flexible method for nanocomposite production. Commonly utilized nanomaterials are carbon nanotubes, nanowires, and quantum dots, but indeed this technique is not limited by these nanomaterials. These nanomaterials are generally included in host matrices such as polymers, metals, and ceramics.

Ink-jet printing is a popular process for 3D printing applications and frequently used for the applications of nanocomposite materials in 3D structures. Inkjet printing is a simple process that creates almost no waste materials. This method operates in a drop on demand manner in which small droplets of material is deposited onto the substrate in the specific place and desired pattern. Upon deposition, the solvent carrying the main material evaporates leaving behind the desired structure. This solvent can be recycled and used over and over making the inkjet method a considerably environment-friendly method.

A combination of 3D printing methods and nanotechnology has provided exciting opportunities and plenty of room to grow for various different application areas. The most promising developments have occurred in biomedical and electronic applications.

3D printing has attracted great attention in biotechnological applications, even gained the name bioprinting for its extensive studies. Bioprinting is a popular topic, especially around tissue engineering applications. The first applications of bioprinting were built around bone tissue engineering. 3D printing technologies can be utilized to obtain biocompatible scaffolds for the culture of cell lines or human stem cells in tissue engineering. Nanomaterials have also gained quite an importance in tissue engineering applications due to their excellent structural and functional properties. Integrating nanomaterials into 3D bioprinted scaffolds provide enhanced scaffold design specificity, increased cell attachment, cell-material interactions, and tissue development. Nanomaterials such as bioactive glass, hydroxyapatite, and calcium phosphate facilitate the creation of native microenvironment for cell growth and increase cell viability. Furthermore, 3D printing technology allows precise tuning of pore size and density of biocompatible scaffolds according to the requirements of tissues. 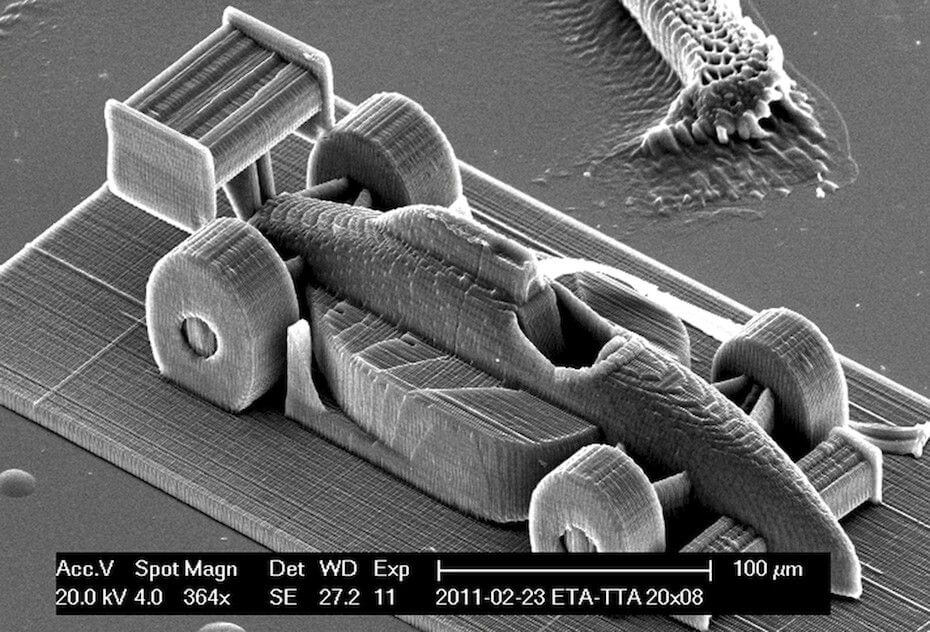 Another important application area of 3D printed nanomaterials is the electrical device application. Metallic compounds which are extremely important in electrical applications due to their superior electrical and thermal conductivities incorporated into 3D printing matrices. These materials are referred to as metallic inks and are utilized in capacitors, embedded wirings, diodes, resistors, and microcontrollers. Such materials are building blocks of electronic chips, sensors, actuators, micro electro mechanical systems (MEMS), and transducers. For example, silver nanoparticle inks have been used in inkjet printing technology to increase the conductivity of materials used in screen printing methods. Additionally, the deposition of carbon nanoparticles such as carbon nanotubes (CNTs) on to a substrate at precise quantities has been utilized in sensor applications due to their semiconducting properties. These sensors can be used as humidity, NO2, and NH3 sensors.

Recently, scientists have achieved microscale Li-ion batteries through the use of 3D printing. The minimum feature size of this structure is reported to be as low as 1μm using inkjet 3D printing. To obtain such small-sized the ink used for cathode and anode materials of the micro battery have been nanoengineering. Nanoparticles of Li4Ti5O12 (LTO) were used as the anode material while LiFePO4 (LFP) was used as the cathode material. The careful optimization of these materials in the deionized water has resulted in reliable flow through the 3D printer nozzle and instantaneous solidification upon placement. This application was a remarkable success of nanotechnology and 3D printing.

Furthermore, complex structures at nanoscale constructed by two-photon lithography or focused-electron-beam induced deposition methods have been suggested for the different optoelectronic applications. These applications are especially valuable for the data transfer and data storage applications since they break down the limitations of the microscale world and exploit the bizarre physics laws of the nanoscale world. For example, 3D printed magnetic nanostructures are considered as promising candidates for 3D data storage solutions such as magnetic racetrack memory. These solutions are aimed to meet the increasing demand for higher data storage densities. 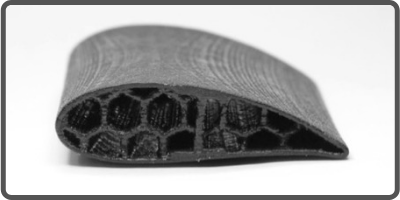 The intriguing properties and capabilities of 3D printing and nanotechnology have been combined for various different applications. 3D printers enable the construction of complex nanosized structures while nanoparticles are utilized to enhance the desirable properties of 3D printed materials. Different techniques are used for the 3D printing of nanocomposites. Amongst these techniques inkjet is the most widely available and simplest option. Incorporation of nanoparticles such as silver, carbon nanotubes, and lithium compounds into polymer, ceramic or metallic matrices facilitates the use of nanotechnology in 3D printing applications. Such nanocomposites are utilized in electrically conductive systems such as circuits and screening applications, sensors, piezoelectric materials, and energy storage applications such as microscale lithium-ion batteries.