Nanoclays are basically composed of layered silicates as thin as 1 to 100 nanometers stacked on each other with predominant applications in biomedicine as bone cement, drug delivery, tissue engineering, wound healing and enzyme immobilization. They play a key role in increasing the performance of potential hydrogels which are widely used in bioprinting. Nanoclays are known as cost-effective tips to improve the thermal barrier and mechanical property of polymers. Nano clays exhibit satisfactory property enhancement when they are dispersed in the hydrogel network homogeneously. Nevertheless, the extreme hydrophilicity of nanoclays make them very challenging to be dispersed in organic polymeric phases. With regard to this some practical and efficient dispersion have been suggested that encompass flocculation, exfoliation and intercalation 1.

Up to this point, a lot of efforts have been put in order to enhance the shear-thinning properties a bioinks through adding nanoclays. The reason for such an addition is nanoclays prevent nozzle clogging and serve as the shielding for encapsulated cells from strong mechanical forces. Additionally, they promote quality and printing resolution when they are employed as additives in bioinks. As an example in cell delivery and 3D bioprinting applications, shear-thinning hydrogels formation via the reinforcement of nanoclays in methacrylated kappa carrageenan (MkCA) polymeric networks has been reported with satisfactory results. Nanolayers of clay adopt an orientation under the shear when they are combined with long chain polymers resulting in stretching the polymer chain by bridging the layers clay. Particularly in the case of ultrathin 2D platelets, the thoroughly anisotropic distribution surface chargers contribute reversible and transient interactions with polymeric chains making it possible for the gel to maintain adequate apply stress 1.

Nanoclays and their Properties

Generally speaking, clay minerals are natural structures with fine grains and layered crystalline substances that originate from chemical weathering of some specific rock forming minerals. They can be categorized as transported and residual clay with the latter being mostly derived from the disintegration and solution of shale, rock surface weathering and chemical decomposition of rocks. However, the transport of clay is mostly produced as a result of erosion. There is a fact that nanoclays is a naturally occurring mineral composed of layers made of an inner of the head roll sheet of aluminum all magnesia place between sheets of tetrahedral structure of silica. Compared to other types of nanomaterials nanoclays are cheap since the raw materials come from naturally occurring sources and are fabricated based on a large scale production facilities. The most widely used nanoclays a concrete is called montmorillonite which is usually no one to have a layered structure of 1 nm thick and 150 nm wide. Specifically, nanoclays half certain qualities to be modified namely high swelling capacity hydration, chemical reactivity stability and interlayer space 2.

Basically, clay materials have been proved to be safe and environmentally friendly and therefore, an attractive agent for an extensive range of biomedical applications. It has also been reported that this class of nanomaterials have failed to impact the mortality rate of Sprague-Dawley (SD) rats through oral administration and that no mutagenic has been recorded as its side effect in spite of their accumulation on the cell surface with no the apparent and clear changes in cell morphology. It has also been demonstrated that the in vitro toxicity experiments of two nanoclays known as clinoptilolite and sepiolite possess a decent tolerance under highly phagocytic cultures. Moreover, Halloysite nanotubes which are a type of nanoclays commonly used in medicine with a wide range of biomedical applications, are considered safe for cells at concentrations of about 75 μg/mL after toxicity rate experiments carried out based on neoplastic cell line models as a function of incubation time and concentration 3.

Nanoclays have had predominant applications in fabricating and preparing polymer matrix–nanoclay biomedical composites based on their role in increasing matrix properties. It was first in the 1960s that nanoclays were employed for this application through polymerization of methyl methacrylate to be absorbed onto clay and the growth on the polymer. Polymer clay on a composite could be synthesized using the in-situ polymerization, melt intercalation and melt blending using microwave an ultrasound irradiation as well as conventional blend extrusion process. Additionally, there have been a lot of attempts to improve the compatibility of clay-based materials and functionalizing by the assembly of different biopolymers. Mechanical properties as the polymer matrix properties could be improved and enhanced through the edition of nanoclays 3. 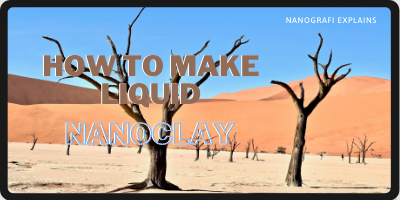 In fact, there are many significant applications of nanoclays in biomedicine namely tissue engineering, drug delivery, enzyme immobilization, cancer therapy, wound healing, scaffold preparation and bone cement. Generally phones are complicated materials made of organic collagen to maintain flexibility and inorganic calcium phosphate to provide the bone with enough strength giving them the characteristics of a natural composite. Particularly, bones can be categorized as cortical and cancellous with cortical bone representing nearly 80% of the total skeleton. However, the mechanical properties as flexibility and strength are different from the two types of bones mention above. Polymethyl methacrylate is broadly used in bone cement in order to fix the knee and hips implants into adjacent bones. On the contrary, this material has shown to have poor quality in providing the bond with enough strength and stability. Therefore, nanoclay materials are extensively used as reinforcements for Polymethyl methacrylate in bone cement applications with improved mechanical properties. Tissue engineering is aimed at improving restoring and maintaining tissue functions. And this case, nanoclays or incorporated in hydrogels such as polysaccharides like chitosan and gellan gum because of the polymer capability to support and proliferate cells. By adding nanoclay fillers, it makes it possible to adjust and improve physical and mechanical properties to meet the qualifications for a particular application. The wound healing using nanoclays is processed in order to prevent minimizing pain, scarring and infection. In this case as well, swelling capability and flexibility are considered crucial. The application of nanoclay composite exhibits in enhanced swelling behavior and excellent antimicrobial quality when compared to some common drugs such as penicillin G 3.

Nanoclays with aluminosilicate nature have been proven to be non-toxic for biomedical applications. In drug delivery systems, nanoclays possess excellent biocompatibility, pH-sensitive salability and anion exchange capacity with the great potential. These inorganic materials are intercalated as nanocomposites capable of developing novel polymer composite materials with tunable and mechanical properties.