Pyrolytic graphite sheets are known to be ultra-thin, lightweight, graphite films with excellent thermal conductivity adequate to transmit and conduct the heat generated by heat sources and devices such as power amplifiers, cameras, CPU’s and processors. The thermal conductivity of pyrolytic graphite is four times as big as copper and three to seven times more than aluminum. It is extremely pliable to be applied to heat-source shapes even in high density mounting situations.

What is Pyrolytic Graphite?

Pyrolytic graphite has been employed as an electrode material in several applications due to its sustainability and renewable nature as well as an original flat surface well-defined structure and close similarities to other carbon allotropes such as carbon black and glassy carbon which are broadly used in electro-analysis, electro-synthesis and fuel cells. Pyrolytic graphite is known to serve as a basic model to study the impacts of surface treatment through irradiating laser, heat and electrolysis on the electron-transfer rates of numerous electrode processes. Activated pyrolytic graphite has been used as an electrochemical detector in liquid chromatography. What’s more, it is used in studying double layer capacitance and electrochemical energy storage system 1.

There is Another Article About Pryolytic Graphite Sheets, Take a Look 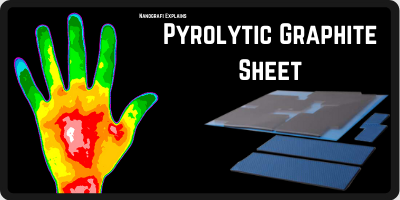 Pyrolytic graphite holds its specific position as an important agent in solution and ambient studies of molecules on various surfaces, whereas its constituent graphene sheets have emerged as the common source of a huge number of investigations. The main reason for pyrolytic graphite popularity and applicability is the simplicity of preparation and use of clean and flat surfaces. A single pyrolytic graphite crystal is a cleaved and adhesive tape and a given exposed clean surface can remain stable in ambient atmosphere and air for hours. Such properties are directly regarded as the result of bindings between carbon atoms. Technically and considering the electronic state, each atom in pyrolytic graphite has sp2 hybridization and is therefore, bounded to three nearest neighboring atoms in planar orientation in order to form graphene sheets with rest of electrons responsible for the delocalized π-bond between the sheets 2.

Pyrolysis is technically a process through which a given material decomposes as a consequence of applying elevated temperatures in an inert atmosphere. Pyrolysis comprises changes in chemical composition and structure. It is mostly employed in organic materials treatment and one of the processes that involves in charring wood. Generally, pyrolytic treatment of organic materials generates some volatiles products with solid residues that are basically rich in carbon. Pyrolysis is regarded as the first step in gasification and combustion. It is predominantly used in chemical industries like ethylene production and many other carbon allotropes and forms as well as other chemicals from petroleum.

Pyrolytic graphite samples usually possess a single cleavage plane most similar to that of mica since the graphene sheets crystallize in a planar orientation inconsistent to graphite which forms randomly oriented zones that are basically microscopic. Because of these properties, pyrolytic graphite shows various strange anisotropic characteristics making it conductive thermally along the cleavage plane and one of the most common planar thermal conductor. Pyrolytic graphite makes mosaic crystals with controlled morphology and is a diamagnetic against the cleavage plane exhibiting the biggest diamagnetic behavior compared to any room-temperature diamagnetic material. Pyrolytic graphite has a relative permeability of 0.9 being slightly less than that of bismuth. The π system localized on the surface of graphite is favorable for studying aromatic molecules due to the π to π interactions that appear to stabilize the molecules on the surface 2.

Pyrolytic graphite is excellent thermal management provision and conducting heat in enclosed areas and as supplemental heat-sink interfaces added to conventional means. This material is flexible, light-weight and could be sliced into desirable shapes in order to protect electronic devices. Based on excellent thermal conductivity, standard pyrolytic graphite sheets can tolerate temperatures as high as 400°C and are available with additional adhesives and laminants to adopt insulation, extreme high and heat resistance.

In addition to physical properties and specifications, pyrolytic graphite sheets can have types based on the additives employed in their structure. In this order materials like, acrylic adhesive, high heat resistant acrylic adhesive, polyamide tape and polyester tape

Pyrolytic graphite sheets have found applications where heat conductivity and thermal treatment involve. Particularly, there are two main areas where pyrolytic graphite sheets are employed namely thermal transfer and thermal interface. They are efficient and useful in developing tools and equipment that are applied where the temperature controlling process has to be performed in an isolated packaging because of downsizing and that the package has to be lightweight. Generally, graphite is extensively used in sliding electrical contact systems like electrical alternators, generators, motors and many other electrical machines mainly because of its perfect heat and electrical conductivity and lubricating properties. In these machines, graphite’s tribological property is greatly influenced by the electric current.

In fact, pyrolytic graphite has turned out to be a practical and ideal solution where the generated heat sources are integrated circuits (IC) such as processor, power amplifiers, CPUs, laptop computers, etc. pyrolytic graphite sheets are widely used in lighting, telecommunications, power conversion and between semiconductors, magnetic components and heat sinks that a lot of heat is generated. They are suitable for products with small sizes like wearable devices, smart phones, 3C electronic supplies and displays. They electronic components where pyrolytic graphite sheets are applied are LED back light, screens, autopilot systems, DDR module, electric vehicles, computer mother board, power supply, wireless hubs and routers.