Lithium-Ion batteries have been a significant invention due to their high energy density. Many researchers are trying to improve lithium-ion batteries since they are used in portable electronic devices and electric vehicles which are required to have long battery life in these days. High energy density, fast rate response, low cost and high safety are the most important parameters for an ideal lithium-ion battery. These parameters are achieved by maximizing the energy density by highcapacity cathodes, silicon-based anodes and organic liquid electrolytes. However, the problem is that operation of lithium-ion batteries is exothermic and organic liquid electrolytes are highly flammable which cause a huge heat generation. This problem affects the safety parameter negatively. For this reason, solutions for safety problems are required. Here we will review a solution brought in by Chinese scientists in their article “Lithium-Graphite Paste: An Interface Compatible Anode for Solid State Batteries” published in the journal “Advanced Materials”.

In this study, it was shown that garnet-type oxides are the most stable SSEs with lithium metal anode. However, it was also seen that lithium/garnet interface has a high impedance due to poor interfacial contact. As a result of this problem, many studies have been conducted to coat the garnet with different materials such as metal, metal oxides, semi-conductors, polymer interlayers and graphite for making garnet lithophilic. Researchers, from Tongji University, found a method to synthesize a ceramic compatible lithium anode by using graphite additives. 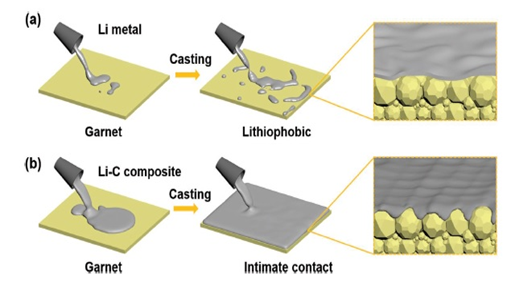 Li-C composite is prepared by adding graphite powders in molten Li with continuous stirring and heating at 250°C. In addition, since graphite is abundant and relatively cheap, it offers lower cost and it does not need any complicated equipment and surface treatment. Thus, Li-C composite anode is a serious candidate for the application in ASSBs.