On the other hand, Pyrolysis involves the atomization of the liquid solution containing the composite of the metal. The atomized droplets are carried by a carrier gas into a furnace where the solution is heated, and the solvent is dissociated in a chemical reaction. As the procedure is carried out, the solution becomes more and more saturated and ultimately no solvent is left behind. Afterward, a precipitator is deployed to collect the nanoparticle produced.

Metallic nanoparticles and nanocomposites are mainly produced using one of the two approaches: Bottom-up and top-down. The most commonly used approach in the synthesis of the metallic nanoparticle is bottom-up, which includes the synthesis of the nanoparticle and nanocomposites from the atomic level to nano. Nucleation is the main working principle involved in this approach, which is the process of breaking down a substance to atomic level. Afterward, the growth of the atomic particle is monitored and controlled until the desired size of the nanoparticles and nanocomposite is achieved. Nucleation can be carried out heating the metal or the substance excessively, making them evaporate into gaseous state or reducing the metallic substances into liquid phases, where a surfactant or stabilizing agent can be utilized to monitor and control the growth of the nanoparticle. This approach consists of three main methods of synthesizing metallic nanoparticles and nanocomposites: Pyrolysis, Gas Condensation (Chemical Vapor Deposition and Chemical Vapor Condensation), and Laser Ablation. In this article, only the first two of the methods of the bottom-up approach will be discussed.

As mentioned earlier, two of the methods of the preparation of metallic nanoparticle using the bottom-up approach are discussed: Inert Gas Condensation and Pyrolysis.

The first and easiest of the methods for the preparation of the metallic nanoparticles and nanocomposites is Inert Gas Condensation. It involves two steps. The first one consists of a source of evaporation, which is used to evaporate the metal or inorganic substance followed by the condensation, which is rapid and controlled to prepare the nanoparticle of the desired size as the second step. The vaporization of the material can be carried out by any sort of the source as sputtering, plasma heating, laser vaporization, electric arc discharge or thermal vaporization. The required spontaneous condensation is carried out by the collection of the vaporized nanoparticles on surface with relatively low temperatures. The whole procedure is processed in an atmosphere of inert gas (He, Xe or Ar). The breakdown of the source to atomic level, which can be done to both solid or gaseous state sources and then the production of the required size of the nanoparticles are determined by the nature of the inert gas (He, Xe or Ar) present in the chamber and the pressure of the present gas in the chamber. Depending on the source of breaking down the source to the metallic nuclei, the method can be called as Chemical Vapor Deposition or Chemical Vapor Condensation. 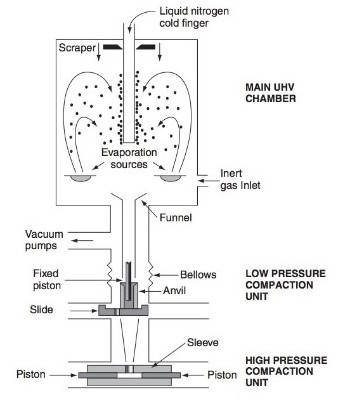 As illustrated in the figure above, there are scattered, evaporation sources in the main UHV chamber. They are a sort of container, having the metal or inorganic substance in solid or liquid form, placed inside it. The containing units have one of the vaporization techniques deployed in them. Once the procedure is started, it turns the non-gaseous state matter into a gaseous state. An inert gas inlet is made into the chamber to make sure the flow and the presence of inert gas in the UHV chamber. To collect the grown particles of the metallic nanoparticles in the chamber, a long tube is placed in the chamber with its outlet source outside of the chamber. Liquid nitrogen, which is also used as cooling agent in air conditioners and refrigerators, is passed through the tube to keep the surface of the tube on the inner side of the UHV chamber col. This allows the collection and rapid condensation of the particles collected on the outer surface of the tube containing nitrogen. When the collection procedure is completed, the nanoparticles and nanocomposites drop down into the collecting funnel and into the chamber, in which the nanoparticle and nanocomposites are treated in low- and high-pressure compaction units respectively to make sure the desired physical properties.

The method of Inert Gas Condensation can be utilized for the production of the nanoparticle and nanocomposites of different metals or inorganic materials including Co, Mn, Mo, Fe and Zn nanoparticles. The method is also used to produce metal alloy nanoparticles like Fe-Cu and Fe-Ni. Chemical Vapor Deposition is also capable of preparing Carbon nanomaterials Graphene and Carbon nanotubes.

In this method, a precursor solution of one the metallic composite is used to make precursor. A precursor is material in transition, which is used to make another material from it i.e. it is not physically present at the end of the process, rather converted into something else. The main purpose is to separate the solute and the solvent from the solution, which is carried out by heating the solution to evaporate away from the solvent following a particular process and eventually produce the nanoparticles.

This method is an intermediate of liquid and gas phase synthesis, but the droplets of the solution in this method are carried by a gas. The most used technique in the pyrolysis method is spray pyrolysis. In this technique, precursor solution processes with the aerosol process which turns the particles of the solution into atoms and heats the droplets, even more, to dissociate by a chemical reaction, to make solid nanoparticles. As the heating continues, the solution becomes more and more saturated as the amount of the solute remains same but the solvent is decreasing as the process is being processed. 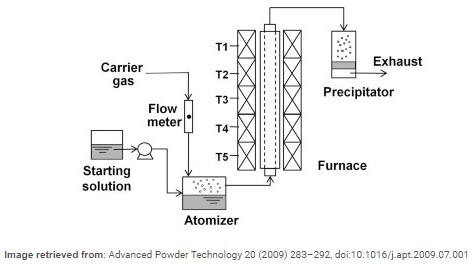 As illustrated in the above picture, the precursor solution is placed in a container from where it is injected into the atomizer. The atomizer heats the solution and turns the liquid into small droplets in gaseous state. Another gas (usually dry), is injected to carry the vaporized droplets to further part and chambers of the equipment. After the atomizer, the droplets carried by the injected carrier gas are taken forward to the furnace. The furnace is divided into part with different values of temperature. The latter part is the temperature of that section. When leaving the furnace, the solvent is completely evaporated and separated from the droplets carried by the carrier gas. The exhaust of the furnace is equipped with a precipitator, which makes sure the collection of the nanoparticles or nanocomposites particles.

Thus, both methods mentioned in this article are two of the main methods used in the synthesis of the metallic nanoparticles using bottom-up approach. The method of the formation, called Inert Gas Condensation, involves the solidification of gas (one of the inert gases) into metallic nanoparticles. Nanoparticles and nanocomposites of different metals, metallic oxide can be made or synthesized by transforming the solution of precursor into aerosols and by excessively heating the solution forcing the solvent to evaporate, resulting in the formation of solid metallic nanoparticles. This method is also known as Chemical Vapor Deposition or Chemical Vapor Condensation method as it may involve the deposition of the composite in the precursor solution or condensation of the composite.