One of the most innovative advances of the twentieth century was the discovery of the transistor which completely revolutionized the electronics sector. After 60 years, its appearance has not abandoned its privilege, it is considered the most important active device in electronics.

Transistors have transformed the planet with great technological advances based on modern electronics with great integration power and processing speed, from which information and communications are nurtured. The search for more efficient transistors is undergoing to demonstrate their superiority to those constructed with silicon. In this article, we will highlight the importance of new transistors made with Graphene.

Read: 60 Uses of Graphene – The Ultimate Guide to Graphene’s (Potential) Applications in 2019

A carbon transistor could replace silicon. New research has shown that it is possible to build transistors; much smaller than silicon and possibly more efficient, with carbon sheets 0.10 nm thick. Unlike other experimental nanoscopic transistors, they do not require a complex manufacturing process or cryogenic refrigeration.

These transistors are made of graphene, a material that conducts electricity much faster than most. It is a flat sheet of carbon atoms only one atom thick. It has great potential as a new (nano) electronic material thanks to the high mobility of its electrons. The big problem in high-speed electronic applications is how easy it degrades, which penalizes the performance of the devices that use it. It could eventually lead to faster and more efficient electronic components that require less energy.

Professor Andre Geim and Dr. Kostya Novoselov believe that these transistors may revolutionize the way transistors are built for devices that require miniaturization and in particular for processors. They managed to build a transistor a few nanometers wide that no longer has large leaks or immense resistivity and makes it stable enough to think about being occupied in functional devices.

The properties of the material due to which more effective transistors can be made are given below:

A graphene is an allotropic form of carbon and consists of a network of hexagonal cells having the thickness of a single atom. Graphene is not a completely unknown or exotic material: the graphite found inside the common pencils is in fact composed of a pile of graphene planes, bound together by weak Van Der Waals forces. In graphene, however, atoms are held together by very strong covalent bonds, to make it the most resistant material available today. A graphene crystal can be considered not only in the planar form but also in a rolled form, also known by the term nanotube.

In graphene, the length of carbon-carbon bonds is approximately 1.42 Å. It is the basic structural component of all other graphite elements including carbon nanotubes and fullerenes. This structure can also be considered as an extremely extensive aromatic molecule in the two directions of space, that is, it would be the borderline case of a family of flat polycyclic aromatic hydrocarbon molecules called graphenes. 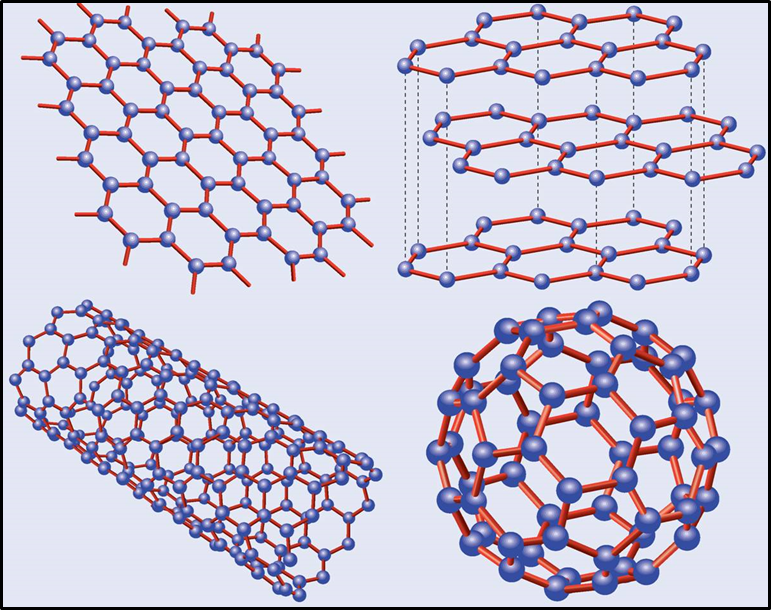 The most outstanding properties of this material includes:

3. Its high thermal and electric conductivity

4. Its resistance (the toughest material in the world)

6. Graphene is very light, like carbon fiber, but more flexible

7. Graphene can react chemically with other substances to form compounds with different properties.

9. It consumes less electricity for the same task than silicon which gives this material great potential for development.

Other interesting properties from the theoretical point of view are the following:

The electrons that move over graphene, behave like quasiparticles without mass, the so-called Dirac fermions. These fermions move at a constant speed regardless of their energy (as is the case with light), in this case at about 106 m/s. The importance of graphene, in this aspect, consists of experimentally studying this behavior that had been theoretically predicted more than 50 years ago.

Graphene has an effect called quantum Hall effect, whereby the conductivity perpendicular to the current takes discrete, or quantized values, allowing this to be measured with incredible accuracy. Quantization implies that the conductivity of graphene can never be zero (its minimum value depends on the Planck constant and the charge of the electron).

Due to the above properties, graphene electrons can move freely throughout the sheet and not be isolated in areas that cannot leave (an effect called Anderson effect, which is a problem for two-dimensional systems with impurities).

The first graphene transistor was introduced in 2004, but lost power and could not be turned off because electrons jumped too easily between carbon atoms.

Now, Andre Geim and his colleagues at the University of Manchester, in the United Kingdom, have developed a graphene transistor that not only does not lose electricity but can also effectively control the flow of a single electron. The thin strip of graphene limits the quantum energy levels available for the flow of electrons, preventing them from jumping from one atom to another with such ease. In addition, an electric field is used to control the flow, adjusting the energy levels to turn the power on and off.

In addition to operating at room temperature, this transistor has relatively easy working. The graphene strip that makes up the device and the surrounding connections can be cut from a sheet of graphene with an electron beam lithograph, the same method used in the manufacture of silicon devices. According to Geim, graphene’s potential as a successor to silicon is now beginning to be seen. Therefore, IT companies should increase their investment in research related to the possible uses of graphene.

In another work published in the same publication of Nature, Geim and colleagues at the University of Manchester, the Max Planck Institute for Solid State Research in Stuttgart, Germany and the Radboud University of Nijmegen, in the Netherlands, have shown that graphene can exist in such a thin form.

“The theory and experiments say that two-dimensional flat crystals cannot exist.” Geim explains. However, the researchers put a piece of graphene on silicon and placed the whole on a metal grill. Then, they used acid to dissolve the silicon, leaving graphene suspended over 500nm holes and a transmission electron microscope revealed that it is covered by tiny waves, which make the material remain stable.

A new manufacturing method that prevents degradation is published in Nature: it consists of placing nano-wires with a metal core (Co2Si) and an insulating envelope (Al2O3) on top of graphene. These nanowires can act as a gate terminal (G) in a graphene-based transistor whose ends are the source (S) and the drain (D). 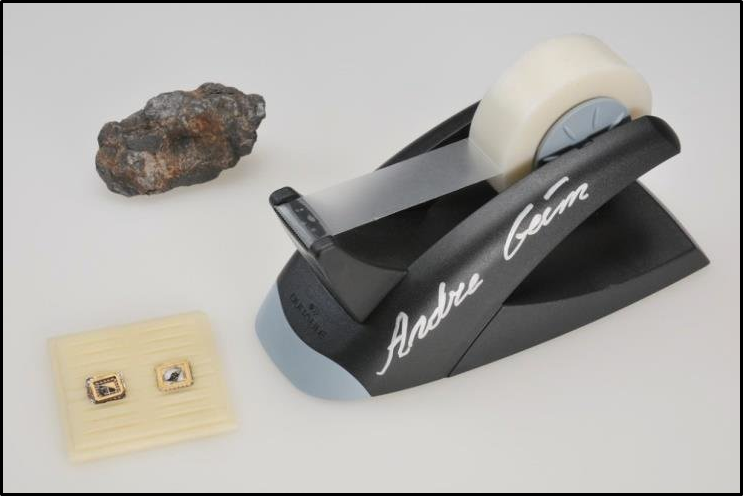 The scotch-tape, graphite and graphene transistor donated to Nobel Museum by Geim and Novoselov.

The new graphene transistors have a channel length of only 140 nm or 0.14 μm, capable of operating at a cutoff frequency between 100–300 GHz, only limited by the parasitic capacitance of the substrate.

Graphene transistors remain stable and “conductive” even when they are only a few nanometers wide. This contrasts with all other known materials, including Silicon transistors, which oxidize, decompose and become unstable to ten times larger sizes. This corresponds to the barrier that Silicon-based technology is currently arriving and most likely could mean its downfall.

IBM has built the fastest field-effect transistor (FET) in the world based on graphene technology, and capable of operating up to the remarkable 26 GHz frequency. According to IBM researchers, the high mobility of electrons available with the materials derived from carbon allows reaching the size of the terahertz, with frequencies even higher than 100 GHz.

The operating frequency of 26 GHz has been reached by a graphene FET transistor (graphene transistor) having a gate length of approximately 150 nanometers; keep in mind that the frequency is inversely proportional to the square of the gate length, so by reducing the latter up to a value of 50 nanometers, it would be possible to reach the terahertz frequency range. Graphene is obtained through the deposition of carbon atoms on a thin film layer, using traditional lithographic techniques similar to those used in the manufacture of normal integrated circuits. Graphene is a special type of graphite, composed of a single layer of carbon atoms packed into a honeycomb lattice structure.

How have IBM researchers succeeded in achieving such a high-frequency value?

First of all, the operating speed of a transistor can be increased by intervening on two primary factors:

1. Increasing the speed at which electrons move within the material. This is a substantial advantage of graphene-based technology: in this type of material, in fact, electrons move at very high speeds, allowing the realization of transistors with high speed and performance values.

2. Reducing the size of the transistor. This approach has been widely adopted in the past to increase the operating frequency of common silicon-based transistors.

The research was partially sponsored by the DAPRA (Defense Advanced Research Projects Agency), with the aim of developing communication systems with wavelengths of the order of a millimeter, capable of operating at frequencies of 100 GHz or higher, and employing graphene transistors.

In the coming years, the research aims to reduce the size of electronic devices and will mainly focus on nanotechnologies such as those that can be achieved with graphene. Electronic devices based on silicon technologies will see their progress decrease or even come to a halt in the coming years, as researchers will have to deal with problems of instability and temperature dependence above certain limit dimensions of the structure. These types of problems do not affect materials such as graphene.

According to the DARPA advocates, the CERA program (Carbon Electronics for RF Applications) will lead to the realization of field-effect transistors based on graphene, with characteristics of high speed and low current absorption; this type of transistor will find its main use in radiofrequency circuits operating at wavelengths of the order of a millimeter. The innumerable advantages offered by graphene (high mobility and speed, ability to carry high currents, good thermal conductivity, reduced geometry, high cut-off frequencies, high transconductance, low noise, low supply voltage) will give the opportunity to obtain applications in the RF field with high performance and integration density.

The CERA program has planned the development of a low-noise W-band amplifier (frequencies above 90 GHz) that will use graphene transistors made on wafers with a diameter greater than 8 inches. Furthermore, if the graphene transistor can operate in a wider temperature range than that of the equivalent silicon-based model, it will be possible to realize more compact electronic devices for high power applications.

To date, MOSFET transistors are built by connecting hundreds of thousands of transistors in parallel. If in the future, graphene technology is applied to high-power transistors, it will be possible to obtain cheaper, smaller and faster power devices.

To recapitulate, Graphene, which consists entirely of carbon atoms arranged in a honeycomb-only honeycomb structure, has a multitude of features that make it attractive in electronics – especially for transistor applications such as radio chips. Graphene Transistors are revolutionizing the electronics industry. The properties of graphene could transform all activities that require computing capacity and, especially, the IoT sector. The development of graphene-based computers will increase device performance by 1000%, along with reducing costs due to the properties of this material. The discovery of IBM scientists could now lead to the technology finally becoming practicable.