Currently, solar cell devices are manufactured with the highest power conversion efficiencies of 20% to nearly 50% depending on the type of the photovoltaic material employed and the way the necessary devices are configured. Graphene has turned out to be a determining carbon-based photovoltaic material for optical energy conversion through which graphene could be utilized as an electrode with transparent nature as well as active interfacial layer, hole transport layer in solar cell device. Efficiencies of converting power has exceeded as high as 10% for heteroatom-doped multi-layered-based solar cells and nearly 15% in the case of graphene containing perovskite-based solar cells. Graphene Serves as an agent in determining the thermal annealing, heteroatom doping layer and thickness bending on the photovoltaic performance of solar cells that are graphene based. At this point, solar energy is considered one of the cheapest, cleanest and sustainable sources of energy used in over 50% of countries worldwide as the main source for generating energy 1.

According to The National Renewable Energy Laboratory, energy conversion of 45.6% has been recorded for a 4-Junction inverted metamorphic solar cell based on AM 5G direct Spectrum at 234 suns concentration. This Record is regarded as one of the highest rates in power conversion efficiencies obtained among all the available types of solar cells so far. This novel solar cell device is capable of receiving more than 1,000 suns of concentrated sunlight. The device comprises a junction basically made of gallium indium phosphide, gallium arsenide junction as well as two gallium indium arsenide junctions that are basically lattice mismatches. A multi-junction concentrator solar cell-based semiconductor material has been reported with the power efficiency of around 46% as a new record. The latest upgrades in solar cell technology reported in the literature show a power conversion quality ranging from 20 to 46% based on the nature of the photovoltaic materials and the configuration of the solar cell devices that can be obtained from inorganic materials such as gallium arsenide, copper indium gallium selenide, crystal on Silicon 10 films, perovskite and multi-junction cells 1.

Types of Solar Cells and Quality of Graphene

Solar cells could be classified according to that types of materials, processing and the nature of materials employed in manufacturing the devices. In this order, solar cells types include crystalline silicon based solar cells, thin film solar cells, quantum dot solar cells and organic polymer based solar cell. Technically, solar cells based on silicon wafers with commercial applications contain heavy metals such as Lead (Pb) and calcium (Cd) which are considered hazardous materials. Therefore, a class of organic materials emerges as valuable alternatives instead. In fact, polymeric materials and organic molecular agents adopt many advantages over other inorganic materials due to their physical properties capable of being tailored and easily manufactured and shaped into ultrathin films and sheets taking advantage of solution processing techniques with practically low price materials in large-scale production. Graphene is the wonder material that seems to meet all the criteria mentioned earlier and is a perfect match to fit into this class of organic materials. 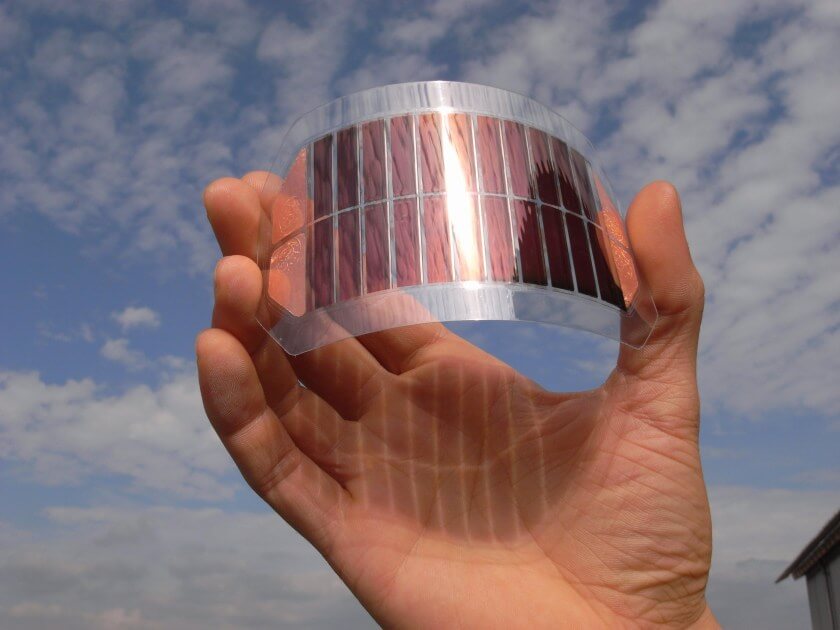 Nanoscale materials like carbon nanotubes, nanoparticles, nanocrystals, nanowires, quantum dots, fullerenes, conjugated organic polymerase, organic-inorganic hybrids and nanocomposites have extensively been investigated for their applications in solar cell technology. However, graphene as a promising two-dimensional nanoscale material as thin as 1 carbon atom layer exhibiting practically high electrical conductivity, great mechanical strength and excellent optical transparency leading to various graphene-based materials as transparent electrodes in designing solar cell devices as a material with an efficient acceptor quality and an interfacial layer. The emergence of graphene as an efficient candidate to replace inorganic materials used in solar cell technology is growing rapidly. In so doing, research into the power conversion efficiency of solar cells containing graphene has shown a progressive growth in the past years. Graphene-containing bulk-heterojunction (BHJ) solar cells, and graphene-containing dye-sensitized solar cells (DSSCs) have been the focus of research and development of solar cells recently. Graphene-based dye-sensitized solar cells are categorized as solid-state and liquid-state technology.

Solar Cells Based on Graphene

The oxidized form of graphite is referred as graphite oxide and graphene oxide is described as an oxidized single-layer or multilayer individual graphene sheet containing functional groups rich in oxygen like hydroxyl group (-OH) epoxide group (C-O-C) found on the basal planes with carbonyl (-C-OH) and carboxyl group (-COOH) located at the terminal sites. The biggest concern about solar cell devices is their environmental stability. To overcome the extreme environmental, organic materials such as carbon-based materials (fullerenes, graphene and carbon nanotubes) and conjugated polymers provide adequate stability against environmental conditions such as moisture, chemical degradation and high temperature in solar cell devices. The unique properties of graphene favors its application in manufacturing solar sales. Particularly, graphene exhibits a satisfactory potential for solar cell devices and fabricating devices with large area due to its excellent transparency, remarkable flexibility and high electrical conductivity. Graphene and its derivatives could be employed as an acceptor or donor interconnecting layer, a buffer layer, the active layer, thin film and transparent anodes and cathodes in designing organic solar cell devices. Through applying graphene, power conversion efficiencies of about 15.6% have been achieved in some classes of solar cells. In general, graphene plays significant roles including interface engineering and transparent conducting electrode in designing and fabricating highly efficient solar cell devices 1.

Silicon has shown to have the quality of absorbing a broad spectrum of electromagnetic radiation with a considerable abundance in Earth crust as well as the perfectly-investigating processing and a predominant application in fabricating commercial solar cell devices and panels. Solar cells based on silicon are basically advantageous due to the high cost of materials and elaborate processing conditions. In the first graphene-on-Silicon Schottky Junction solar cell, a square window out of silicon was made though etching off silicon oxide (SiO2) layer (300 nm) on an n-silicon wafer with graphene sheet to conform the contact with the silicone window to build up the Schottky Junction to be transferred all together onto the device substrate. The graphene sheet here serves as a coating anti-reflection quality to reduce light Reflection by 70% in the visible region of electromagnetic radiation and 80% in near-infrared region 2.

Power sources based on nanoscale materials are indispensable. Single crystalline nanowires with semiconducting quality or nanobelts can be designed and grown on devices through the bottom-up approach on just about any substrate such as flexible substrates. In the combined Schottky electrode, a high-potential Au layer makes it possible to build up a Schottky barrier with cadmium sulfide nanowire. In this step, graphene improves the transparency and the conductivity of the electrode so high that the transparency of 74% in 400–1200 nm wavelength range is achieved along with the measured sheet resistance of about 410 U per square 2.

The rise of graphene-based materials has led to extensive applications in solar cell devices. Researchers have realized that the properties of the one-atom thick carbon sheet as graphene are promising for solving a lot of concerns in solar cell device designing and fabrication. Graphene has drawn a lot of attention and interest as it possesses strong mechanical and electrical conductivity as well as a superior thermal conductivity over other materials. The solar cell industry now is broadly dependent on silicon wafers and other inorganic semiconducting but organic and organic/inorganic hybrid solar sells devices have turn out to be great potentials. There has been a significant development in the fabrication of solar cells based on graphene oxide and graphene.