Graphene is considered by many specialists to be a miracle material at the origin of the next electronic revolution. Its excellent reputation has also been recognized in the area of Quantum Computing. Due to it, researchers have significantly improved the process of separation of Cooper pairs in a superconductor, using pairs of quantum dots. The goal is to separate obtained electrons remain entangled, which would open a new path to the realization of quantum computers. There are many other applications of Graphene in Quantum Computing. This article mainly discusses the use of Graphene in Quantum Computing.

Graphene, pure carbon whose atoms are arranged in a regular hexagonal pattern, is called numerous times as the magic material. It is a sturdy material, 100 times more than steel; more elastic than carbon fiber; light (Graphene can produce graphene aerogel, a material about 6 times less massive than air and has already been considered the lightest ever created); It is a superconductor of electricity. Its uses are found in batteries, wiring, paints, photovoltaic plates, photographic sensors or screens, and displays. It can also make the seawater drinkable. Now it’s applications are being discovered in quantum computers.

What are Quantum Computers?

Quantum computers exploit the laws of physics and quantum mechanics for data processing. Their fundamental unit is the qubit, capable of performing calculations simultaneously thanks to the superposition of quantum states. That’s why it is written that this new computer science can allow us to overcome the limits of Moore’s law. The quantum computer, instead of the digital bits, which are represented by a binary code, 1 or 0, use the “qubits,” which can be in both states simultaneously and can also influence each other even if they are not physically connected. The fundamental property of the quantum computer is, therefore, the possibility of overlapping the classical states, i.e., 0 and 1. The second fundamental property that characterizes them concerns the so-called interference; a third important property is linked to the possibility of the qubit being entangled, that is, intertwined with each other leading to a profound correlation.

What are the applications?

We have already understood how the quantum computer is able or at least promises to process – at the same time, through parallel calculation – more solutions to a single problem instead of carrying out sequential calculations as it happens now. For some applications, the quantum computer will be exponentially faster than the transistor computer, such as encryption (cybersecurity), the weather forecast, the creation of new materials. The first applications, however, will be precisely in the discovery and creation of new materials. An example that is often given is that relating to developments in cybersecurity.

To exploit this machine, you need completely different software and language, and to date, there are very few developers who know where to get their hands. We are, it must be said, at an early stage in the development of quantum computing, but Graphene has proven to be effective in the development of Quantum Computing.

Among the quantum computing phenomena, most amazing and whose potential application could lead to the new technological revolution in the 21st century, we must undoubtedly count on superconductivity and intricacy. Superconductors are already used to make squids, as well as the magnets of the LHC. However, researchers dream of discovering new types, capable of operating at room temperature. The quantum entanglement, made famous by the EPR paradox and Schrödinger’s cat, allows for cryptography and quantum teleportation. The physicists hope to get through it of quantum computers. Rudimentary quantum computers already exist, but they are still unable to beat conventional computers, in particular, to solve certain very specific problems. It should not be the same with quantum computers handling a large number of qubits, the quantum equivalents of conventional bits.

These qubits can be worn by the states of the spin of electrons or photons, for example. For applications in the field of quantum computing, it is necessary to be able to obtain entangled particles. It is now possible to produce pairs of entangled photons based on nonlinear optical phenomena. We can also produce entangled electron pairs form Cooper pairs, which are at the root of the phenomenon of superconductivity. The use of such pairs allows quantum calculations. In particular, it is necessary to be able to separate them to use each electron individually while maintaining the entanglement between the two electrons for as long as possible.

In theory, to obtain pairs of entangled electrons separated from the Cooper pairs, it suffices to contact an ordinary conductor in the form of two filaments with two of the ends of a block of material in a superconductive state. In practice, too often, a pair of Copper is simply found in one of these filaments. But a team of Finnish and Russian researchers announced in a publication available in free access on arXiv that they had obtained much more satisfactory results. The trick that makes this performance possible is to use quantum dots based on Graphene. This is enough to confirm its reputation as a miracle material.

What are Quantum Dots?

Quantum dots are packets of atoms, with electronic properties intermediate between those of semiconductors and those of discrete molecules, constituting nanocrystals of a semiconductor material whose dimensions are less than 10 nm. They were discovered in the early 1980s by a solid-state physicist, the Russian Alexei Ekimov.

Depending on their size, these nano-objects can absorb light at different wavelengths and convert them into electron-hole pairs in the semiconductor. Inexpensive, they are, in particular, easy to manufacture from a solution. These quantum dots then called colloidal, are well known because, in suspension in a liquid, they make it fluorescent when exposed to ultraviolet light.

However, these are not the quantum dots that researchers used to effectively separate electrons form Cooper pairs while keeping them entangled for a long time. The boxes were produced by putting into practice a technique well known in nanotechnology with semiconductors, namely the use of an electron beam to trace patterns on a surface.

A process is known as electron beam lithography or electronic lithography. This technique makes it possible to push back the limits encountered in photolithography due to the phenomenon of light diffraction and to draw patterns with a resolution up to the nanometer. In this case, the physicists cut pairs of rectangles of 200 × 150 nm in a layer of Graphene deposited on a substrate made of silicon dioxide. The members of each pair were then positioned 180 nm apart and connected to a superconductor formed from a thin sandwich of titanium and aluminum.

Experiments have shown that, unlike those performed with quantum dots composed of indium arsenide (InAs), it was possible to separate up to 10% of the Cooper pairs produced in a superconductor. Researchers believe they should be able to further increase this separation rate. But there is one more thing to demonstrate before we can seriously use these graphene quantum dots to make quantum computers or for other applications related to quantum information technology. Indeed, theoretically, quantum entanglement should be preserved by this new separation process, but the phenomenon remains to be demonstrated. New experiences are planned.

Of great interest is the use of Graphene to make the primary language of the quantum computer, the qubit. A bit in today’s computers is 1 or 0, and with that binary language, we communicate with computers, and they process the data. The qubit uses a characteristic of the subatomic world: the superposition of states. Thus, a qubit is one and also 0 simultaneously. This exponentially multiplies the capacity to process data and reduces the times from years to hours of computing.

How do they do that? Take a deep breath: “There are two types of particles in our three-dimensional world: fermions, like electrons, and bosons like photons or light units. A graphene sheet has only two dimensions. It is, in truth, a tiny two-dimensional universe, and new phenomena occur in that universe. For example, fermions and bosons can integrate anions, which are between fermions and bosons. And with that state, you can create a qubit for quantum computing.

In current computing, 1 and 0 are expressed in a transistor by a bridge whose ends electricity passes or does not pass. An example of qubit would be that in a transistor at the same time, electricity passed and did not pass (this is the subatomic world). The essential problem with qubit is the overlap of states, 1 and 0, is very fragile and collapses to 1 or 0. So we are looking for how to create stable qubits for, at least, the short time necessary for each step of a Program.

Furthermore, researchers at the Swiss Federal Institute of Technology Lausanne are working on a graphene capacitor that is capable of creating stable qubits (a qubit is the information storage unit of quantum computers, which unlike bits do not have two positions but three) at very low temperatures (at which these computers work).

This third position of the qubits is critical since it increases the computational and storage capacity exponentially. But producing stable qubits is a difficult thing to do. Furthermore, they are susceptible to disturbing stray magnetic fields.

To do this, they are usually targeting superconducting circuits, most of which operate based on the Josephson Effect: the appearance of an electric current through a tunnel effect between two separate superconductors. This device could significantly improve how quantum information is processed, although it could also find other applications. 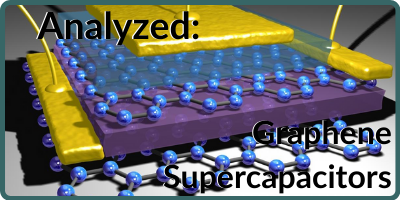 Thus, Graphene and quantum computers have high hopes for technological evolution. The 2D structure of a graphene sheet is formed of carbon atoms at the nodes of a hexagonal crystal lattice. Graphite is a stack of these structures. Graphene has magical applications: it can accelerate the detection of hepatitis, improve the performance of electric charges, and generate a superconductor or super speakers. So Graphene deserves the expectations that are placed in it. For now, it seems so. These two concepts of graphene and quantum computers have emerged as symbols of human evolution as they represent paradigm shifts in their respective fields (materials and computing). The applications presented in this article are just a few of the possibilities that Graphene offers in the field of Quantum Computing.