Research is growing around Graphene batteries. They are considered one of the most promising solutions for the years to come. They are gaining improvement in performance, especially in terms of battery life and charging speed compared to conventional batteries. It is, therefore, worth the investment in resources of which Graphene is a part. This article aims to look at the details of Graphene battery.

The batteries have trouble keeping the current pace of the evolution of electronic components. Although it is possible to store a large amount of energy in certain types of batteries, they are very bulky and very heavy. They charge and release their energy with a relative slowness.

Graphene is considered in recent years as the solution that will be the heart of the batteries of the future. R&D focuses more on this track to boost the performance of current energy storage solutions.

Samsung is one of the fastest-growing companies in this field. In November 2017, the Korean firm filed a patent on a Graphene battery capable of storing twice as much energy as of current batteries and recharging five times faster, much like the sodium-ion batteries. A French start-up will produce mass by 2020.

Graphene is derived from carbon which is an extremely flexible element that can take many forms. Graphene is a thin layer of pure carbon that is a million times thinner than paper, so much so that it is actually considered a two-dimensional element. It finds itself in a lot of everyday objects. The graphite that makes up the pencil lead is for example obtained after compiling Graphene. Graphite is an allotrope of carbon, which means that it has the same atoms but they are arranged in a hexagonal shape, which gives the material different properties.

In addition to being very thin, it is also one of the most resistant materials in the world, which led James Hone, a professor at Columbia University to state metaphorically that Graphene is so resistant that it could hold an elephant balanced on a pencil. But if it is considered a holy grail, it is also because it has a huge potential that could revolutionize many sectors, including batteries.

Read: 60 Uses of Graphene – The Ultimate Guide to Graphene’s (Potential) Applications in 2019

Graphene does not change the traditional operation of a battery that relies on an electric accumulator with two electrodes: a negative (anode) and the other positive (the cathode). The flow of ions always passes through an electrolyte solution in one direction or the other depending on whether the battery is charging or discharging. The main difference between graphene and conventional batteries lies in the composition of the two electrodes. In a graphene battery, the electrodes are composed of hybrid material with graphene which can boost performance in terms of energy density and speed accumulation.

The difference with Li-ion batteries

Contrary to what one might think, graphene does not replace the Li-ion battery but is incorporated in it to improve its performance. Samsung’s graphene battery, for example, is based on a cover of the anode and cathode by “graphene balls“, as the researchers explain in an article published in the journal Nature.

In most batteries, the oxides used for the electrodes are not good conductors of energy. By adding graphene balls, the researchers were able to improve these materials by increasing their electrical conductivity, but also the accessibility of lithium ions. 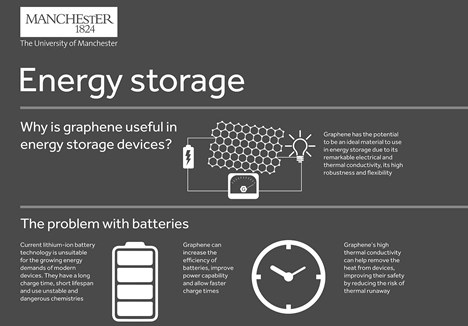 Several companies have focused the attention of their researchers on Graphene batteries for a few years not only because they are safer than lithium-ion batteries, but also because this material promises better performance. Graphene is known for its high electrical conductivity. Electrons move in fact up to 150 times faster than in silicon, which reduces the charging time. It also has better energy density and better endurance.

In lithium batteries, the charge is linked to ions that migrate from one electrode to another. As they are heavy they do it slowly. In graphene, electrode migration is much faster. Graphene is produced in the form of inks, through a process of graphite exfoliation and superposition of successive flexible layers. Two sheets of graphite, two porous membranes based on graphene and a polymeric membrane moistened by an electrolyte are placed. The resulting device is very light, can be easily integrated into clothing and is usually wrapped in an outer layer made of water-resistant materials that can be washed without a problem. Graphene batteries have not shown any signs of degradation, even after 30 thousand cycles of full charge. They have an average charge duration twenty times longer than lithium batteries.

Moreover, batteries made with this Graphene have proven to be more advantageous than current lithium-ion batteries because they far exceed their performance in various aspects:

2- The life of a graphene battery is twice that of a lithium-ion battery.

3- The energy density in relation to the weight is very high compared to a conventional lithium-ion battery (600 Wh per kg versus 150).

4- Its manufacturing is 80% less expensive.

To this, we must add that installing a graphene battery in any current device does not require any type of adaptation. Its operation is identical to that of a normal battery.

Another important benefit of these batteries is that they would be much safer. The lithium ones use a liquid electrolyte that, in contact with the air, goes into combustion and causes the battery to burn and explode. In this case, the electrolyte used is graphene, which does not burn on contact with air.

This would be great news for Samsung, which would have a technology that its rivals do not have, and that would allow it to gain even more market share. In the second half of the year, Samsung was responsible for 40% of mobile phones sold in Europe. Its best-selling phone was the Galaxy A50 with 3.2 million units, followed by the A40 with 2.2 million units. Nothing is known about the phones that will include this battery, but it would be one of limited circulation because Samsung would still be increasing production capacity while reducing costs. Initially the graphene battery was expected to arrive this year, but finally, it seems that it will take at least one or two more. 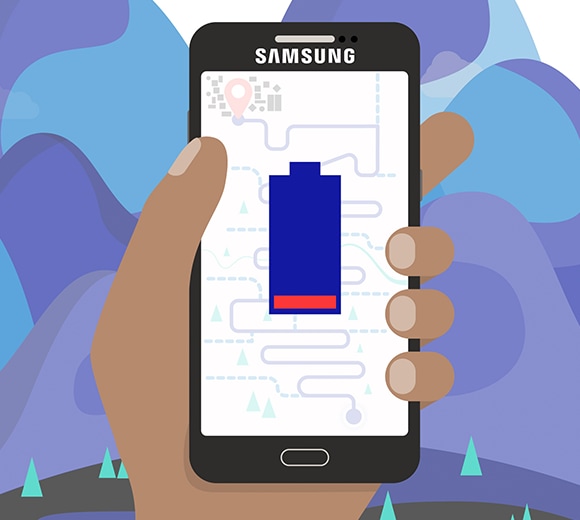 Lithium batteries contain cobalt. This mineral in alloy with other metals makes the batteries more durable. However, its extraction is highly polluting and comes mainly from the Republic of the Congo, a country with a lot of political instability and that usually employs children for mineral extraction. When cobalt particles enter the atmosphere, they cannot be removed. People who work in industrial plants can be exposed to metal and develop serious diseases. Another drawback is associated with the large amounts of water and energy that are required for the manufacturing of lithium-ion batteries. In addition, lithium batteries are damaged over time and use.

The emergence of new graphene batteries is creating great expectations and many technology companies are considering using them in their products in the short or medium term. As the battery industry improves the wholesale manufacturing of this component without losing the quality of its properties, it will be increasingly common to find them in different electronic devices.

The telephone sector is betting strongly on this type of battery that could significantly improve autonomy and recharge speed. It is rumored that brands like Samsung could include them in their next model (Galaxy S11). It is a revolution in mobile devices.

One of the main limitations that electric vehicles currently have is the duration of their batteries. On average, the battery of these cars provides an autonomy of about 200 kilometers and in the best case, the estimated time to recharge is 30 minutes. However, some brands are already announcing that soon their vehicles will have graphene batteries with 1000 kilometers of autonomy and can be recharged in less than 10 minutes.

Samsung would launch a mobile phone with a graphene battery in one or two years. Samsung filed a patent two years ago on a new graphene-based technology that allowed the creation of batteries capable of storing 45% more charge in the same space as a current lithium battery.

This has been revealed by Evan Blass, known for his accurate “mobile leaks”, and that has allowed us to see the first real photos of dozens of mobile phones exclusively. Blass has revealed that Samsung is planning to launch in 2020 or 2021 a mobile phone that will use a graphene battery instead of a lithium-ion battery as its current terminals use.

Due to this new battery, the mobile would not only increase its density by a percentage that would be at least 45% higher, but would also charge up to five times faster, being able to fully charge a mobile in less than 30 minutes, while currently it takes around two hours for full charges from 0 to 100%.

In spite of the fact that the charging speed is much higher, the deterioration of these graphene batteries is lower, so the durability would increase and retain a greater capacity for charges over the years. In addition, once production increases to an adequate level, the price of batteries would also decrease.

Thus, a graphene battery is akin to a traditional lithium-ion battery. Instead of graphite, which is usually used in the anode and the cathode, graphene is found, a crystalline material synthesized for the first time in the laboratory in 2004. Graphene has more interesting properties than graphite for batteries. Graphene has a higher thermal conductivity than graphite. We are talking about a factor of about 400 times which means that the heat will evacuate more easily, Better heat conduction means that battery problems that catch fire on their own might be a thing of the past. And that’s just one of the many benefits of graphene. The material also offers resistance that extends the life of the batteries, and its large exchange surface increases their capacity and speeds up the charging speed.