The improvements in nanotechnology have been a great success in different areas of science. As the scientists succeeded in obtaining nanosized structures and discovered the powerful properties of these structures, they have thrived to come up with improved versions in the nanosized realm. Much like many other areas of science, nanotechnology takes its inspiration from nature. The hierarchical structure of marine starfishes and sea urchins has been the foundation of new nanosized materials. These new structures have multiple rays of rams extending through a core body, which increases the surface to volume ratio, active surfaces, and adsorptive surfaces. One of the essential members of these novel structures is star-shaped nanoparticles known as nanostars. Most of the researches on nanostars mainly focused on gold nanostars even though some examples of palladium, platinum, silver, and rhodium are also present in the literature

Gold nanostars are a member of anisotropic gold nanoparticle category. They attract particular interest due to the modifications in their shape, such as number, length, and aspect ratio of branches.

The synthesis of gold nanostars is mostly based on the chemical reduction of gold salts. There are two different approaches to gold nanostar fabrication. The first approach is known as the seeded-growth method. There is a technique called the seeded-growth technique in which the performing seeds act like the nucleation points and the additional materials deposit on these seeds. This method usually leads to different sizes of monodisperse particles. This method involves chloroauric acid (HAuCl4) reduction with ascorbic acid on gold nanocrystal seeds that are pre-synthesized, in cationic surfactant’s presence and at room temperature. These surfactants are also known as capping agents and believed to trigger the anisotropic growth process. However, the use of these agents requires post-treatments for separation from the gold nanostar structure. The nature of seeds and reducing agents are the important parameters for the morphology of resulting gold nanostars. Frequently used capping agents are; typically cetyl-trimethylammonium chloride (CTAC), cetyl-trimethylammonium bromide, CTAB), N, N-dimethylformamide (DMF) and hydroxylamine sulfate 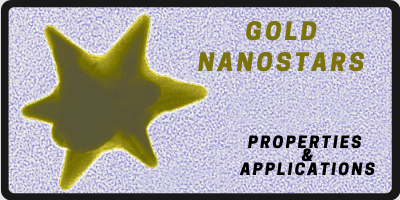 On the other hand, in one pot, methods in situ formation of seeds are observed. Then the subsequent growth of branches takes place. This method usually involves the use of reducing agents and surfactants under room temperature and verity of reactant concentrations and reaction times. For this method, frequently used surfactants are CTAB, SDS, and PVP, while reducing agents are ascorbic acid, hydrazine, and DMF. However, through the one-pot method, it is also possible to prepare gold nanostars without the use of capping agents. The absence of capping agents reduces the complexity of post-separation steps. Even though this method is highly sensitive to synthetic changes resulting in a difficult control of morphologies and sizes, their usage has spread wide enough because of their high versatility

Light-driven technologies have helped us for ages in enhancing the quality of living by making various advances in communications, medicine, energy, and culture. Throughout the last decades, a massive effort has been made through a specific control over the employed materials to improve such technologies that are light-based. “Plasmonics,” a new field in research, has emerged. In free-electron materials like metals, in response to incoming light, the coherent oscillations of changes occur, which is called plasmons. When such oscillations are limited to a metal-dielectric interface, and light intermingles with particles that are smaller than its own wavelength, an oscillation of a local charge is produced around the particle, called localized surface plasmon resonance (LSPR). This ability to confine the light in nanoscale dimensions offers plasmonic nanoparticles with various exceptional characteristics, including improvement in the large electromagnetic field, rich spectral responses, and high photothermal conversion efficiencies. These characteristics are extremely beneficial for various applications across many fields, such as biotechnology and biomedicine, biosensing, nanocatalysis or computational sciences, solar energy technology, among many others. Despite the broad range of existing plasmonic materials (heavily doped semiconductors, aluminum, copper, and metal oxides, and recently used chalcogenides and graphene), Silver and Gold are still the most usually utilized materials. Although LSPRs work more efficiently in silver, due to their synthetic accessibility and superior chemical inertness, special attention is received by gold nanoparticles (AuNPs). Nanosized gold usages can be seen in ancient histories such as Faraday’s pioneering colloids and the Lycurgus cup. Since Mid 20th century, huge progress is achieved in AuNPs synthesis with anisotropic morphologies, but the making of monodisperse gold spherical particles is still unknown.

The morphology of gold nanostars ranges from a simple three-branched structure to multiple sharp branches. As the nanostar size increases, the number, the core size, and the branch’s aspect ratio also increases. With the increase in size, the stars become more inhomogenous in shape, while the overall size remains homogenous. The size, proximity, and a number of the branches affect the properties of gold nanostars. The optical properties, for instance, localized surface plasmon references (LSPR), catalytic properties, and surface-enhanced Raman Scattering (SERS), are the main reason that the gold stars have grabbed considerate attention. Hybridization of plasmons focalized at the core and the tips of the nanoparticles results in the intrinsic optical properties of gold nanostars. The gold nanostars cor makes electromagnetic field enhancements of the tip plasmons by acting as an antenna. The Plasmon frequency and intensity of gold nanostars depend on the arrangement and the number of spikes. The morphology of spikes is controlled through different fabrication conditions. The unique nature of the gold nanostars displays strongly localized surface plasmon resonances (LSPRs), which are related to collective oscillations of conduction electrons produced during interaction of the metal with visible or near-IR light. Relatively lower LSPRs, around 600nm, represent the core of gold nanostars while higher LSPR values are related to the core-tip interactions. The most abundant asymmetric Gold nanostar can be positioned if we control the aspect ratio in synthetic conditions and set the range to 750-1150 NIR. The LSPR features of gold nanostars can even be tailored after synthesis by introducing a small amount of reducing agent to its environment. The morphology of the gold nanostar starts to change upon this introduction and allows the fine-tuning of LSPR.

Another important optical property of gold nanostars is SERS activity. The Raman enhancement is the combined effect of the local increase in electric field when the molecule is illuminated by light at its resonant wavelength and the increase of the strength of the Raman dipole-emission transition at a longer wavelength. The electromagnetic enhancement, which is because of LSPR, is a major contributor to the SERS phenomena. Gold nanostars show significantly high SERS activity compared to a sphere dimer, which is considered to be the paradigm SERS substrate. The enhanced electric field is noticed at the tips of the gold nanostars, which facilitates the amplification of the Raman signal. However, it is also possible to observe these enhanced electric fields between aggregated nanostars. The large Raman signal amplification allows the SERS’ observation from molecules adsorbed onto gold nanostars.

Due to the above-mentioned properties, gold nanostars are used in different areas of work such as heterogeneous catalysis, and in biomedicine such as; nanosensing assays, thermal treatments, imaging, clinical chemistry, surface-enhanced Raman spectroscopy, and target drug delivery applications because of their astonishing optical features and less toxicity.

Gold Nanostars’ most important applications are because of its physical properties, which arise primarily from resonant oscillations of conduction electrons of the nanoparticles, which are also known as localized surface plasmon resonances (LSPR).

The unique properties and multi-branched structure have helped Gold Nanostars in grabbing an incredible amount of attention towards them. Intrinsic features like exceptional physiochemical activities and remarkable optical properties are possessed by these metallic nanoparticles. These gold nanoparticles that are star-shaped can mainly be used in photothermal therapy, biosensing, imaging, target drug delivery applications, and Surface-enhanced Raman Spectroscopy.

The strong LSPR properties and the accompanying SERS signals are the basis of gold nanostar applications in highly sensitive assays. SERS specifically is a strong method to detect various biomarkers such as RNA, DNA, protein, etc. ) because of its specificity, high sensitivity, and capability for multiple analyte detection. In nanosensing assays, gold nanostars are usually used as the substrate for SERS and facilitate the chemical sensing of analytes. The analytes can be physically or chemically absorbed on to the nanostars’ surface for detection. Absorbed analytes induce reproducible SERS enhancement factors, which are a great basis for sensing applications. The SERS nanosensors can also be used in numerous applications, including Gene diagnostics, pH sensing, and detection of proteins.

Thermal therapy is one of the types of medical treatment in which high temperatures (up to 45-47C) are faced by body tissue. It is used for the treatment of cancer by attacking cancer cells and then damaging or killing them. The spherical gold nanoparticles are not efficient for this application since they absorb visible light, and the penetration of visible or UV light in tissues is limited. ~800 nm (in NIR) is the best optimal wavelength for penetration in tissue. The tunable LSPR of gold nanostars in the NIR region makes them great candidates for thermal therapy applications. Furthermore, the use of gold nanostars reduces the damaging of non-cancerous cells.

Thermal therapy is also very helpful in treatment against microbes. For example, the adjusted LSPR of gold nanostars in the 700–1100 nm range is found to be effective on Staphylococcus aureus biofilms.

The traditional medical treatment applications require improvement. Scientists have been developing targeted drug delivery systems for much more efficient therapeutic applications. Due to their unique characteristics like stability, size, and biocompatibility, gold nanoparticles are considered good candidates for targeted drug delivery. Gold nanostars are one of the promising gold nanoparticles because of their increased surface area, tunable size, and surface morphology. Gold nanostars are functionalized with drug molecules for enhanced therapeutic applications. The drug release from the functionalized gold nanostars is obtained by the desorption of drug molecules through ligand-exchange processes. Gold nanostars are also used to deliver drugs directly into the cancer cell’s nucleus.

As it was mentioned before, the catalytic properties of gold are further enhanced in the form of gold nanostars. Gold nanostars can be used for the reduction of aromatic nitro compounds, such as nitro-thiophenol (NTP), nitroaniline (NA), and nitrophenol (NP). The increased catalytic activity can be linked to the stepped surfaces, corners, and high density of electrons present at their tips. The optical properties of gold nanostars make them great candidates for photocatalytic applications since they can efficiently harvest light and enhance photochemical transformations. Another attractive feature of gold nanostars is their tunable surface plasmon resonance band. In addition to photocatalysis, gold nanostars are also used in the electro-catalysis for methanol oxidation and oxygen reduction from the electro-reduction process of H2O2.

To conclude, in this article, there is a review based on Gold Nanostars’ general and structural properties, which means that information about Bioimaging, diagnostic, drug delivery applications, and photothermal therapy was given in a detailed way. Summarized information highlights the GNS super capability for applications in the biomedical area as potential multi-functional materials.

Gold nanostars are basically multibranched gold nanostructures holding the promise for novel procedures in biomedical applications such as medical diagnoses and sensing platforms. Star-shape nanoparticles have been suggested for sensing so increasingly based on their remarkable surface-enhanced Raman spectroscopy.