What is a Carbon Nanotube?

Carbon nanotubes (CNTs) are one-dimensional allotropes of carbon atoms with sp2 hybridization prepared by rolling graphene sheets up to adopt a tubular morphology. In general, one, two or more rolls of graphene sheets are known as single- (SWCNTs), double- (DWCVTs) and multi-walled graphene nanotubes (MWCNTs), respectively. Technically, single-walled carbon nanotubes have found applications in various fields of science, technology, new-age nanoelectroic devices and industry due to their remarkable and unique chemical and physical properties. With regard to the few techniques presented so far, carbon nanotubes are obtained based on the so-called physical top-down synthesis method 1. Carbon nanotubes are considered as the building blocks of molecular electrical circuits and they not only have the potential to be employed as interconnectors between active molecular elements in a given device, but are also capable of serving as the device element itself.

Transistors are a class of semiconductor devices specifically used to amplify or switch electrical power electronic signals. They are made of materials that are basically semiconductors mostly with the combination of three terminals to be connected to an external circuit. In a transistor, the current through one pair of terminals is controlled or transmitted once a current or voltage is applied to another pair of terminals. A transistor is capable of amplifying a signal since the controlled power as input can come out higher than the input or controlling power. Generally, transistor are used individually but there are many of them which are found within integrated circuits.

The concept of field-effect transistors are first suggested in the 1920s and the first practical device was a point-contact transistor designed in the 1940s that won a Nobel Prize in Physics in 1956. Since then, transistors have revolutionized the electronics Industry and made it possible for designing cheaper and smaller calculators, computers, radio and so forth. Most of the transistors are designed and made from highly poor silicon with some others made of germanium. However, with the growth of science and technology as well as advances in material science, new classes of semiconductor materials are replacing the conventional materials due to their specific and unique electronic and physical properties like graphene and carbon nanotubes. In a field-effect transistor there could be just one kind of charge carrier or two kinds of charge carriers in bipolar Junction transistor devices. Transistors are basically smaller and consume less power to operate compared to the vacuum tube. Some certain vacuum tubes have shown to be advantageous over transistors at considerably high operating frequencies and the voltages.

Where there is a weak electronic signal or electrical power, transistors rise as a solution to amplify and switch them. Field-effect transistors (FETs) are a class of transistors that take the advantage of an electric field to control the electrical current. These semiconductor devices contain three terminals known as gate, drain and source. FETs alter the conductivity between the source and drain through applying a voltage to the gate which in turn maintains the application of an FET as a switching device to conduct low current when it is off and high electrical while it is on. In fact, this ON/OFF gate controlling operation is carried out by modulating the gate from a higher value in the ON mode to the lowest OFF value. The ON/OFF ratio of the current is a significant measure of digital switches performance as the larger the ratio, the better the performance 2. Also known as unipolar transistors, field-effect transistors carry electrical charge using either electron or electron holes (lack of an electron at a given positing causing a positive charge) but not simultaneously.

Carbon nanotubes in general, show unique thermal and chemical stabilities, higher tensile strength and perfect transport conductivity. Carbon nanotubes diameter and helicity are described by the roll-up vector connecting equivalent based on their crystalline structure. Their electronic-band structure calculations determine whether a given carbon nanotube is a semiconductor or a metal. It is always instructive to consider the electronic properties of graphite in order to understand the carbon nanotubes electronic properties in a carbon-carbon sp2 hybridization. Graphite is known to be a zero-band-gap or semimetal semiconductor with their conduction and valence band degenerate at six points. Therefore, a particular piece of the graphene sheet with its two-dimensional (2D) nature rolls up to create the one-dimensional (1D) single-walled carbon nanotube inhering the mother graphite’s properties in an amplified quality behaving like a metal or a semiconductor based on the crystalline lattice geometry. Regarding this, almost two-third of CNTs are semiconductors with one-third being metallic agent 3. 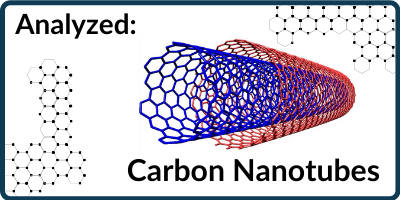 A transistor based on carbon nanotubes is a field-effect transistor that utilizes a single carbon nanotubes or a formation of carbon nanotubes as the channeling material instead of silicon which is used in traditional transistors. Carbon nanotubes transistors were first introduced in 1998 that took the advantage of single-walled carbon nanotubes with the diameter of as small 1 nanometer capable of operating at room temperatures. The commercial applications of this technology has led to many technical challenges. Today in the 21st century and the emergence of nanoscopic era through advances in nanotechnology and material science, electronic and electrical devices are expected to fall into smaller and smaller sizes more than ever.

Considering the demand for high speed data processing, science and technology have faced the challenge of Moor’s Law which states the data processing speed of computer chips is expected to grow two-fold every two years. In order to achieve the higher data processing speeds, it is necessary to increase the number of transistors per square inch of any electronic and electrical device until the power density and the performance improve. Simultaneously, this increase would require an increase in the price of a given item. Obviously, transistors based on Silicon are on the verge of reaching their limits making science and technology from around the world to concentrate on finding an appropriate alternative or silicon. Undoubtedly, carbon nanotubes are considered as the most quantified and promising material to replace silicon due to their excellent electronic and physical properties as well as electric transmission capability. The synthesis of carbon nanotubes entails the focus on some minor details causing them to be unavailable for mass commercial production. The difficulty is the synthesis process of carbon nanotubes leads to the nanotubes transistors that could be even larger than silicone-based if a desirable performance is required. In order to get over these difficulties special transistors contacts are based on cobalt-molybdenum have been designed capable of transmitting current through nanotube transistors.

Technically Cobalt molybdenum in this class of transistors is applied to make contacts with lower resistance and direct bond to nanotubes end to save valuable space. Uses of cobalt guarantees that a bond could be established at lower temperatures. In fact, the reduction in the temperature of reaction facilitates designing contact as well as maintaining their structural integrity leading to band gaps as low as 29 nanometers between the drain electrodes and the source.

Achievements have been reported in the application of several parallel nanotubes near each other in order to increase the total electrical current transmission. Each carbon nanotube in this order is 30 nanometers long and 1.4 nanometers wide. The high current processes the charging of the gate of the next device in the circuit at a really high speed. Researchers have succeeded in placing several parallel nanotube wires close to each other, thus increasing the total electrical current. Higher current provides the fastest charging of the gate of the next device in the circuit. Based on this technology the total footprint of transistors could be reduced to only 40 nanometers compared to Silicon transistors that are 100 nanometers across. Transistors based on carbon nanotubes have the potential to be applied in wireless communication devices that necessitate the flow of high current throughout small area. In fact, microchips based on nanotubes are capable of functioning 5 times as fast as the silicon chips which are going to be available for industries not later than 2020. In another attempt, a programmable 16-bit carbon nanotube microprocessor has been created as the most complex integration of complementary metal-oxide conductor and carbon nanotubes containing 15000 transistors with the capability to be used in a commercial chip manufacturing facility. According to this study, the capacity off today’s commercial process is to produce 99.99 percent semiconductor nanotubes and 0.01% metallic 4.