Metallic nanoparticles (MNPs) represent a veryinteresting area of research due to their unusual magnetic,electrical, optical, and thermal properties.These properties are highly dependent on the size, structure, morphology and accordingly on their mechanism of synthesis.These outstanding properties originate from quantum effects which can be associated with their very high surface area to volume ratio. Hence, they have drawn great attention by the scientists in order to utilize them in a range of applications. It has been considered that MNPs could be used in applications that require small size (under 10 nm), with precise control of size, composition, and morphology in chemically significant quantities. Among metallic nanoparticles, cobalt nanoparticles (CoNPs) exhibit quite unique magnetic, optical, and catalytic properties.

Cobalt is a chemical element with the symbol Co and the atomic number of 27. Like most of the metals, cobalt is found on Earth’s crust only in the chemically bounded form. It is a rather hard, bright, gray or black colored metal. It is a well-known ferromagnetic element along with iron and is commonly used as an allotting element in permanent magnets. Bulk Co has hexagonal close-packed (hcp) and face-centered cubic (fcc) phases. In the case of small particles, however, the fcc phase preferably exists. At the nanoscale, a new so-called ϵ -phase was found in 1999 by the scientists Dinega and Bawendi. Hcp-Co is magnetically harder than fcc-Co due to its high magnetocrystalline anisotropy and coercivity as compared to the low magnetocrystalline anisotropy and coercivity of fcc-Co. ϵ -Co has the magnetocrystalline anisotropy between hcp and fcc phase of Co, and it is also considered as a soft magnetic material similar to fcc-Co. However, the as-synthesized cobalt nanoparticles adopt to noncompact, metastable structure of ϵ-Co gradually evolves at room temperature toward the stable hexagonal close-packed structure of Co. In addition, magnetization curves are consistent with the zero-valent Co. As expected in this size range, the CoNPs are superparamagnetic at room temperature.

The morphology of cobalt nanoparticles is spherical, and their appearance is either grey or black powder. They have the ability of absorbing electromagnetic waves. Also, colloidal CoNPs show a great potential as catalysts. These materials have significant potential as higher activity and selectivity catalysts to a range of reactions, including hydrogenations, enantioselective hydrogenations, hydrosilylations, hydropyrolysis and hydrogenolysis, oxidation of CO and CO/H2, oxidative acetoxylation, Suzuki and Heck-Type couplings and cycloaddition reactions. For instance, they can be used in the Fischer−Tropsch process to convert CO and H2 into liquid hydrocarbons. In this specific example, CoNPs shows enhanced selectivity compared to their conventional competitors. In this way, it is possible to control the size, shape and metallic dispersion, resulting in increasing the catalytic performance in comparison to conventional catalysts.Another indirect use of CoNPs in catalysis is that being involved as a magnetic carrier for the actual catalyst without taking part in the catalyzed reaction itself. They facilitate the recovery of the catalyst from the reaction medium upon using an external magnetic field to collect the nanoparticles. As an illustration, a Mn (III) complex supported on magnetic CoNPs has been used as a retrievable heterogeneous catalyst to oxidize alcohol and sulfide compounds. Moreover, CoNPs are also used in the medical field, particularly in diagnostic tools. They are efficient contrasting agents in magnetic resonance imaging for cancer diagnosis. They can also be used for treating cancer cells either by thermally destroying the tumor upon excitation by an alternating magnetic field of suitable amplitude and frequency or by targeted drug delivery into the tumor cells. Besides, CoNPs can also be used in various technological applications, such as data storage, spintronics, or magnetic fluids. Ferrofluids are colloidal suspensions of very fine (about 10 nm) magnetic NPs whose viscosity can be modulated upon application of a magnetic field. CoNPs find a place for applications in dynamic sealing devices, heat dissipation, dampers, and many other technological uses. In most of these applications, monodisperse CoNPs are needed with sizes ranging from a few to a few tens of nanometers.

As reported for other metals, metallic CoNPs can be produced through either physical or chemical methods. Physical methods include sputtering deposition, laser evaporation, and then condensation in a gas flow, in a liquid, or on an olid surface. However, the limitation of such techniques is the lack of size control for particles smaller than 100 nm. For this reason, liquid-phase syntheses are usually preferred. In particular, the chemical routes, on the basis of the reduction or decomposition of a suitable precursor of the desired metal, usually provide better size control for nanoparticles smaller than 10 nm. Several methods can be applied to decompose Co precursors, like thermal decomposition, reduction (H2 gas, hydrazine, etc.), ultrasonic activation, photolysis, and hydrolysis reactions. The reaction medium can be water, an organic solvent, or an ionic liquid (IL). The chemical synthesis of Co-NPs can be usually accomplished by reduction of metallic salt, reverse micelles, or thermal decomposition of an organometallic precursor.

The first method used for nanoparticles production is based on the reduction of cobalt salt by a polyalcohol (polyol). In brief, cobalt acetate and oleic acid were mixed in diphenyl ether (DPE) and heated to 200℃ under N2 atmosphere. Then, a volume of 1.0 mL of TOP was added and the mixture is heated to 250℃. Subsequently, the reducing solvent (1,2-dodecanediol dissolved in DPE), at 80℃, is injected into the mixture. The mixture is held at 250℃ for 30 min until the reduction is complete and then it is cooled to room temperature. Ethanol is used to precipitate Co nanoparticles. The solution is centrifuged (3000 rpm) and the nanoparticles are re-dispersed in a solution of 94% octane, 5% octhanol and 1% oleic acid. 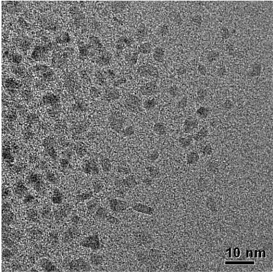 Figure 1: TEM images of Co-NPs prepared by the polyol process[1].

As it can be observed, Co-NPs presented have undefined shape and size, with some agglomerations indicating that the nanoparticles are not well dispersed. It should be noted that, it is not possible to obtain the histogram of size distribution for this method. The polyol method is a rather slow process, which takes more time for nucleation and growth of nanoparticles due to slow reaction rate and low monomer concentration. Therefore, the shape control of Co-NPs by polyol process is more difficult than it is with other processes.

Thermal Decomposition of an Organometallic Precursor

The second method studied was described by Puntes and Krishnan, based on the decomposition of an organometallic. A typical synthesis consisted of heating of TOP oxide to 80℃ /30 min under vacuum. It is injected with 1,2-dichlorobenzene (DCB) and oleic acid (OA) and the mixture is heated up to 180℃ under N2 atmosphere. Then, Co2(CO)8 is diluted in DCB is rapidly injected into the solution under vigorous agitation. The variation of amount of oleic acid is adopted to control the particle size, using the OA/Co2(CO)8 molar ratio of 0.2, 0.4 and 0.8 to prepare CoG, CoM and CoP nanoparticles, which refer to large, medium and small nanoparticles, respectively. After, the flask is kept at 180℃ for 15 min and cooled to room temperature. Ethanol is again used for nanoparticles precipitation. The solution is centrifuged (3000 rpm) and the nanoparticles are re-dispersed in a solution of 94% octane, 5% octhanol and 1% oleic acid. 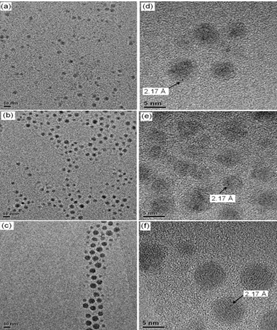 In this method, the idea is based on the reduction of a salt metallic by borohydride. The synthesis consists of the addition of a mixture of NABH4 and ethanol to a solution of cobalt acetate, ethanol and oleic acid in a drop-like manner, at room temperature. The same OA/precursor ratio of the second method is adopted for CoG nanoparticles preparation as well (0.2). The molar ratio of the mixture was 1 Co(CH3COO)2 : 6 ethanol : 0.2 OA : 2 NaBH4. Finally, the solution is centrifuged (3000 rpm) and the nanoparticles are re-dispersed in a solution of 94% octane, 5% octhanol and 1% oleic acid. 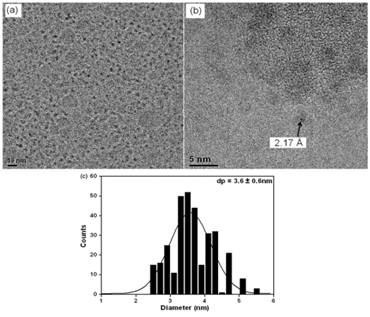 Figure 3: (a) TEM, (b) HRTEM images and (c) histogram of size distribution of Co-NPs prepared by the method of reduction by borohydride[3].

It is demonstrated that Co-NPs can be obtained by chemical methods in an efficient way, with low size distribution, if some synthesis parameters are well controlled. The method based on the decomposition of cobalt carbonyl at high temperatures seems to be the most appropriate to size and shape control by the variation in the ratio precursor/surfactant.

In a general way, it can be concluded that the formation of Co-NPs is extremely sensitive to the synthesis conditions. Therefore, before using a synthesis method described in the literature, one should observe the real influence of synthesis conditions such as temperature, stirring and composition of the mixture for an effective control of size distribution and particle shape. Also, it should be considered that the metallic nanoparticles are rather a new research subject in science world. Although cobalt nanoparticles have some outstanding properties, it is a rather new material and more research should be done in order to enhance the properties and moderate the disadvantages. A lot of researches are still being conducted to improve its properties and lower its manufacturing cost in order to implement its use in real life applications. In the coming years, this material will innovate the world of technology due to its unique characteristics.