Being investigated in scientific research and practical applications as one of the most important members of carbon fibers is Carbon Nanofiber (CNF). They are considered as promising materials in different disciplines like electrical and electronics devices, electrode material for batteries, supercapacitors and as the sensor. They are usually useful in application in which high electrical conductivity is required, which depends on the dispersion and percolation status in the matrix materials.

Carbon Fibers were first prepared by Thomas Edison in 1879 by the carbonization of cotton and bamboo strands for the conversion of energy and storage, sensing devices and reinforcement of composites, while in 1889, Hughes and Chamber dated a patent regarding filamentous carbon nanofiber through gas pyrolysis. The carbon nanofibers have a slight difference in structures as compared to the traditional carbon fiber. They are very versatile, famous for their mechanical, electromagnetic shielding, electrical and thermal stability with their existence at nanometer scale.

Let’s have a deeper look at its characteristics:

Despite their microscopic size, they possess high mechanical and chemical properties. They have great dimensional stability maintaining the excellent thermal and electrical conductivities as they are thermally treated after various polymers undergo electrospinning. They also feature very low weight, ease of processing and shaping, and are resistant to corrosion with very high reinforcing capabilities. The numbers of defects decrease as the diameter of the fiber decreases, hence increasing the tensile strength of carbon nanofiber. The tensile strength of the carbon nanofibers varies inversely with the diameter of the fiber i.e. the tensile strength of carbon nanofiber increases as the diameter of the fiber decreases and vice versa. They exhibit very high flexibility. When the surface area/volume ratio is increased, it causes the increase in the area of contact between the polymer matrix and the filler, hence resulting in higher flexibility, which allows the fibers to maintain its ratio without bending or breaking. They also exhibit smoother and better finish due to smaller size of the fillers.

Carbon nanofiber has a low density of 1.3 – 2 g/cm3. The thermal conductivity ranges between 1950 – 6000 W/m K and electrical resistivity from 1 x 10-3 to 1 x 10-4. They have a tensile strength ranging from 2.92 to 500 GPa and tensile modules from 240 to 1500 GPa. The length of the carbon nanofiber can be up to 100 micrometers and average pore radius of 0.2 micrometers. The sonication of carbon nanofiber was completed for 20 s with output power of 120 W or 6 min for the power of 20 W. All the figures give the aspect ratio of 38 to the carbon nanofiber. The nested carbon nanofibers are stacked in parallel into different forms of structures or at an angle specified with reference from the axis of the fiber, causing a huge number of reactive edges inside and outside of the structure.

The compression-molded slab was used to measure the volume resistivity of the carbon nanofibers. To measure volume resistance, a programmable voltage source (Keithley 230) test fixture was deployed. Pressed samples were plugged into the four specified conductivity points of the apparatus. The observations and calculations were taken with a voltage of 500 V applied for highly resistive material (PEI) and composite materials with up to 3 phr of modified carbon nanofiber and 100 V for composite materials with 3 phr of modified carbon nanofiber. 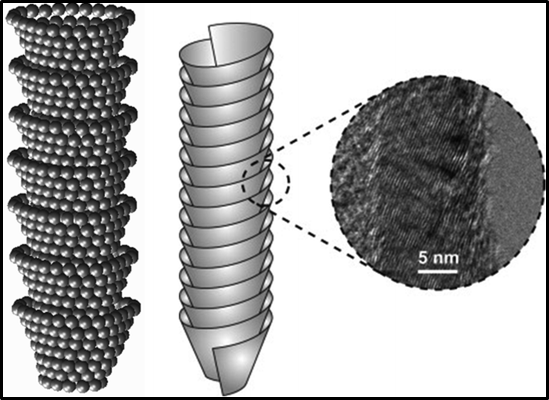 MIT researchers used carbon nanofibers to develop the electrodes of the lithium-ion battery that is capable of performing four times the overall storage capacity of present lithium-ion batteries. Technologists are even using carbon nanofibers to develop sensors that can indicate the absorption of the chemical vapors by changing color of their appearance. They ought to utilize the carbon nanofiber sensors to indicate the condition when the layer that absorbs and filter pollutants in a gas mask becomes saturated with the harmful elements or chemicals.

The availability of the material at reasonable prices decides further market development in carbon nanofibers. The capacities of production in bulk of highly pure carbon nanofibers (CNFs) have been achieved by the researchers and scientists at very low cost using a process involving catalytic chemical vapor deposition (CCVD).

The stabilization and carbonization of carbon nanofibers after electrospinning polyacrylonitrile (PAN) has become an easy, convenient and obvious way to synthesis continuous and fibrous carbon nanofibers.

Field Emission (FE) and Electron Field Emission, more popularly known as Field Electron Emission, is an electrostatically induced emission of electrons. The emission of the field from a solid or liquid surface into vacuum is the most common context. However, the emission of field takes place when moving from a denser to less dense surface, low conducting dielectric or any non-conducting surface. The induction of field promotes electrons to conduction band from the valence band of semiconductors, which is also known as the Zener effect, which can also be referred as a form of emission of field.

The reproduction of the images of the surfaces using a physical probe used to scan the sample provided is called the Scanning Probe Microscopy (SPM). It is one of the branches of microscopy.

It is also used in the development of the carrier materials for the deployment of various catalysts in petrochemistry.

A platform for delivering gene in vertically aligned arrays. Impalefection delivers genes using nanomaterials including the materials as carbon nanofibers (CNFs), nanowires and carbon nanotubes (CNTs). Nanostructures resembling needles-like structures are perpendicularly synthesized to the substrate surface. The gene contained in plasmid DNA, meant for the intracellular delivery, is attached to the nanostructure surface. Many arrays containing these needles-like structures are kept in a chip, which is then pressed against cells or tissue, where required. The delivered gene(s) can be expressed by the cells that are impaled by carbon nanofibers or nanostructures.

The processes involving the manufacturing of composite material of a carbon-carbon consists of the steps of treatment with a catalyst material (containing metal), of a carrier material containing carbon. The metal must be able to form carbon structures of nano size and growing carbon structures of nano-size by deploying the deposition method of chemical vapor on the carrier, treated in an atmosphere containing carbon gas, optionally followed by a modification step for the surface. This process makes possible the optimization of hydrodynamical properties, surface chemistry and porosity independent from each other, which is especially beneficial in context of using the composite for purification of water. Black-based carbon composites are especially handy for the applications of filler.