Buckypaper is a new material that is very resistant and lightweight, it is manufactured using compressed carbon nanotubes (CNT) (long and cylindrical structures comprising of hexagonal graphite components joined at the corners). A ‘buckypaper’ is made of CNT fibers with approximate size 50,000 times smaller than the diameter of a humanbeing hair. We should not be deceived by the fact that it is such a fine material, nanotubes have atomic bonds so strong that make them twice harder in comparison to diamond.

When its sheets are combined, the resulting composite material, which looks like the carbon paper of a typewriter or carbon copy, is 10 times lighter as compared to steel, though 250 times powerful. Also, different conventional composites, it conducts electricity like silicon and scatters heat like steel. In this structure, the capacity of carrying current is very high. It also has exceptional low optical reflectivity and thermal conductivity.

Its different uses are still under study, but, proving once again that nanotechnology is a dream come true, practical applications are already very interesting. In the aeronautical industry, they seek to implement its use, since by reinforcing the structure with buckypaper, the weight is reduced, saving fuel and adding other advantages, such as reinforcement against lightning discharges.

Its use on the structural base of the vehicles as well as on its body seems one of the most practical applications of this material. But we still have to wait a few years for its real commercial applications, since the creation of this material is still being improved, and it requires a very large cost and is only being produced at the laboratory level. Like everything, for the prices of this technology to fall, it is required to expand the commercial possibilities in reality and for that, it will take some time.

The first project about which the buckypaper is to be used is the protection of electronic components as well as the protection of the airplanes against the effect of the rays under storms, electrodes for capacitors and batteries or as substitutes of the graphite-like dissipators of heat in laptops.

Its use is also very interesting in the field of medicine since it is a good material to use in artificial implants. The research on PLATFORM project is underway, which is part of the H2020 Framework Program, it aims to develop open access pilot lines for the industrial production of ‘buckypapers’, pre-impregnated and treated with CNT for compound applications in different sectors. 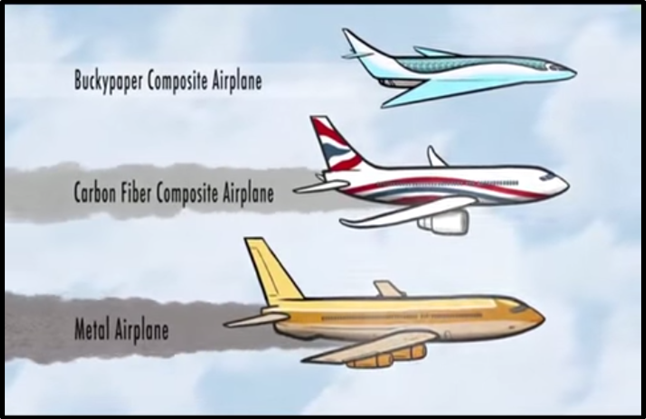 Among the potential applications of buckypaper that are under investigation, the main ones are indicated below:

It can be integrated into roofs for fire protection as it greatly enhances fire resistance because of its impressive reflection of heat by the compact and dense layer of CNTs.

Buckypaper has the potential for illuminating TV and computer screens when exposed to an electrical charge. It facilitates uniform brightness level as compared to liquid crystal display (LCD) and cathode ray tube (CRT) as it is lighter in terms of energy efficiency.

3. Buckypaper as a Conductor of Heat

As CNTs are great thermal conductors, Buckypaper has also great potential to produce heat sinks that facilitate electronic equipment, such as computer to disperse heat with great efficiency as compared to current techniques. This can be very helpful to discover more applications in electronic miniaturization.

Electromagnetic interferences that harm equipment and affects configuration can be prevented by protecting electronic equipment and circuits in an aircraft with the help of buckypaper. This can also be valuable to safeguard the electromagnetic “signatures” of military planes and help them to avoid the Radars.

Buckypaper has the potential to act as a TRAP microparticle filter membrane in liquid or air. As buckypaper is insoluble and is operated with a wide range of functional groups, it can remove compounds selectively.

Buckypaper could also be helpful for effective shielding if it can be manufactured in a huge amount at reasonable rates.

The biological tissues, for example, nerve cells, can also be grown with the help of Buckypaper. It can be electrified to promote the development of a particular kind of cells.

It can also be employed as an electrode component for lithium-ion batteries, vanadium redox flow batteries, and supercapacitors.

Likewise, there is a plethora of applications of Buckypaper that are still to be discovered in the coming years.

The current researches and the potential of Buckypaper

The buckypaper sheets are composed of carbon nanotubes and contain up to 50% of them. Ten times lighter and potentially five hundred times stronger than steel – when the sheets are stacked and pressed together, they form a conductive composite of current and temperature – have a wide range of applications ranging from lightning protection to the structure of airplanes or automobiles.

Dr. Wade Adams, director of Smalley Institute at Rice University (Houston) praises its properties “All of these properties are what nanotechnology scientists have been trying to achieve as they search for some kind of grail”. Unfortunately, at the moment, buckypaper can only be manufactured at a very high price, in small quantities, and their resistance is still too low compared to their potential. This makes their handling and their use delicate. To solve this problem and make the material industrially competitive, the research team led by Ben Wang has developed a way to infiltrate the buckypaper into a polymer solution to create thermoplastic composites that are more consistent, harder, and more responsive for an industrial environment.

The research was conducted at High-Performance Materials Institute at Florida State University, supported by experts from Lockheed Martin Missile and Fire Control. One of the main problems is that the nanotubes attach themselves to each other at uncontrolled angles, which limits the resistance of the buckypaper. Wang’s team’s solution is to expose the nanotubes to a strong magnetic field, which has the effect of aligning them properly and thus increasing the resistance of the buckypaper. Another problem is that the nanotubes are so smooth that it is difficult to keep them together with epoxy resin. Researchers are looking for a way to add small amounts of defects to nanotubes to improve chemical bonds. With the approach of Resin infiltration comes the difficulty in controlling the amount of impregnated resin and the final thickness of the buckypaper. Resin infiltration is a multi-step process involving a number of parameters such as resin viscosity, temperature and impregnation pressure, as well as drying and firing conditions.

By observing samples of this component in detail, the team noticed a complete impregnation of the resin. However, scanning electron microscopy reveals a difference in the thickness of the samples. The negative effect of this is an inconsistency in the mechanical and electrical properties from one sample to another, for the same structure of nanotubes. To counteract this problem, the team conducted a parametric study: statistical and experimental approaches are used to identify the dominant parameter and formulate inter-parameter correlations.

For now, the researchers have obtained samples that are half as strong as the best composite material of the moment, but Wang hopes to fill this gap quickly. His goal is to get by the end of next year a composite buckypaper as resistant as the IM7but 35% lighter. The long-term applications, according to Wang, are in aeronautics. However, it will take up to five years to obtain a new structural material in aeronautics. Wang hopes to get the first applications of buckypaper for the protection of aircraft against electromagnetic interference and against lightning. Other shorter-term applications are also possible, in particular for the electrodes of fuel cells.

Buckypaper is a thin sheet based on an aggregate of carbon nanotubes (CNTs). The nanotubes are about 50,000 times thinner than a human hair which shows excellent mechanical and electrical properties that make it potentially suitable for fuel cells and composite structural applications. It has a wide range of applications including aeronautics and medical sector. A lot of researches are still being conducted to improve its properties and lower its manufacturing cost in order to implement its use in real life applications. In the coming years, this material will innovate the world of technology due to its peculiar characteristics.