The developments and improvements in nanotechnology in last decades have provided the use of nanoparticles in various areas for many applications such as biomedical, electronics, pharmaceutical, cosmetics, aerospace and so on. Inorganic nanoparticles have been widely used in various areas such as biomedicine, electronics, photonics, and thermotics due to their unique chemical and physical properties. With the help of rapid development of science technology, inorganic nanoparticles and their applications have been drawn great attention, and hence research and experiments on inorganic nanomaterials became more and more important. Among inorganic nanomaterials, boron nitride nanoparticles have attracted high interest due to their unique chemical, physical, thermal and electrical properties.

Boron nitride is an inorganic compound with the chemical formula BN. Boron nitride exists in non-crystalline and in several crystalline forms which are isoelectronic to a similarly structured carbon lattice.

When compared to three-dimensional bulk (3D) substances, nano-size structures are envisaged to show new properties due to surface and interfacial effects. Therefore, nanoparticles have been drawn great attention because of the fact that these new properties would promote novel applications in engineering. Boron nitride (BN) nanoparticles are considered as the most promising inorganic nanomaterials so far. These boron nitride nanoparticles can have different forms such as nanotubes, nanosheets, nanofibers, nanorods and nanoribbons. Boron nitride nanotubes (BNNTs) were experimentally discovered in 1995 after four years of the discovery of the carbon nanotubes (CNTs). Subsequently, other one-dimensional boron nitride nanoparticles including nanosheets, nanorods, nanofibers were discovered and synthesized.

Bulk h-BN has been a topic of significant interest since their discovery due to its low density, excellent inertness, high thermal conductivity, high thermal shock resistance, electrical insulation, low friction coefficient, and superb oxidation resistance. BNNTs and BNNSs (nanosheets) also exhibit these properties as they are inheritors of bulk h-BN.

BNNTs possess significant thermal conductivity and high specific heat. According to theoretical calculations, high specific heat of BNNTs and their thermal conductivity is higher than that of carbon nanotubes. Also, they have high thermal shock resistance. Another research on thermal stability of BNNTs stated that oxidation resistance of BNNTs can reach up to 830℃ in air. Moreover, this study shows that the onset temperature for the oxidation of BNNTs (800℃) is much higher than the onset temperature for the oxidation of CNTs (400℃) under the same conditions.

BN nanoparticles are generally known as insulators because the have wide bandgaps of 5.0-6.0 eV. These wide bandgap property, meaning electrical insulating behavior, can encourage the utilization of BN nanoparticles on applications as protective shields encapsulating nanomaterials. Moreover, BNNPs exhibit distinctive violet or ultraviolet luminescence emissions, which promote their usage in surgeries, photocatalysis, and optical storage. Also, BNNPs do not have colorization problem as CNPs have. This advantageous property can be quite useful in different application areas.

BNNT films can achieve superhydrophobic state with contact angle with water above 150 degrees, while h-BN films are partially wetted by water with a contact angle of only ~ 50 degrees. From the difference of these two materials, it can be said that a significant change from hydrophilicity to superhydrophobicity. Because of the extreme chemical inertness of BN, pH value of water does not affect the wetting characteristics of BNNT and BNNS films. Thus, BN nanostructure films are very likely to be used in industrial applications such as water-repelling, self-cleaning, anti-corrosion systems.

It is important to state that BN absorbs neutrons very well, and it can be a good and suitable material in radiation protection applications. Also, the neutron absorption concept can be used in cancer treatments which will be discussed on the following pages.

Most of the techniques known for the synthesis of CNTs have been modified to synthesize BNNPs as well. These techniques can be divided into two groups.

Arc discharge is a continuous process using the ac-jet method at high temperatures (5000-20000K) for the production large-scale of single and multi-walled BNNTs. In this method, a mixture of h-BN and catalyst metal powders are used as precursor and a combination of argon (Ar) and N2 gas is used as the plasma gas during production.

Laser ablation is a laser assisted technique to produce single-, double-, and triple-walled BNNTs by using a mixture of Ni, Co, and BN powders in an inert atmosphere. A rotating catalyst-free BN target in a continuous laser ablation reactor under N2 gas is used to obtain bulk quantities of BNNTs. Therefore, high yields of single-, and multi-walled BNNTs are obtained based on the vaporization of h-BN particle targets via a continuous CO2 laser under N2 flow at approximately at 3500K. However, the final product can contain unwanted morphologies besides tubular structures. 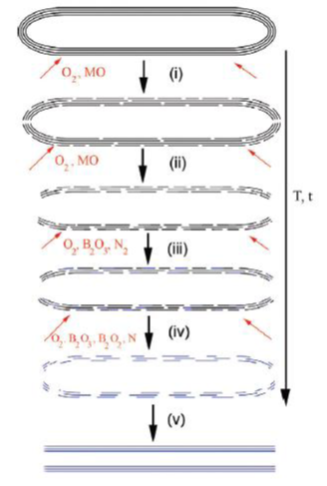 Figure 2: Schematic of the substitutional reactions in BNNTs, developed with temperature (T) and time (t)[2].

Carbothermal methods are alternative ways of synthesizing BNNTs. The idea is based on turning CNTs to BNNTs through the substitution of carbon atoms with B and N atoms. These methods can lead to the generation of BNNTs with smaller diameters than those of starting CNTs.

Chemical vapor deposition (CVD) is a route to synthesize significant amounts of BNNTs through heating a mixture of B, MgO, and FeO powders up to 1300℃. The growth vapors are transported by an argon gas flow to the reaction chamber, where a substrate is placed in it and heated up to 1550℃ under NH3 flow. As a result, BNNTs (both cylindrical and bamboo-like) with 20-100 nm can be produced by this method. This technique is successfully applied to obtain high yields of thin BNNTs with an average diameter of 10 nm by using a mixture of Li2O and B powders as precursors.

By ball milling of h-BN powders, high yields of BNNSs can be obtained under an N2 atmosphere. Ball milling conditions are accommodated to generate gentle shear forces which results in production of BNNSs. It is considered that this method could be applicable to produce nanosheets from any layered materials.

Boron nitride nanoparticles are used in various areas in many applications, and the application areas can be listed as given below.

As it can be seen clearly, boron nitride nanoparticles are used in various application areas due to their exceptional and superior chemical, mechanical, electrical, and thermal properties. The list below indicates the most common application areas of BN nanoparticles deriving from their thermal, mechanical, chemical, electrical, thermal, and optical properties.

An overview of research on boron nitride nanoparticles has been presented in terms of structure, properties, synthesis, and application areas. Although BNNPs have interesting properties and promising outlook, the research progress on physical aspects and potential applications are limited so far. Therefore, more research and experiments are needed to find and explore new sides of these nanomaterials.