Aluminum oxide is a compound composed of two aluminum atoms and three oxygens bonded together in a hexagonal close packed (hcp) crystal structure. The common name for the compound is alumina and it has found several applications in the industry due to its abundance and abrasiveness.

What are Aluminum oxide (Al2O3) nanoparticles?

These are nanosized spherical particles from an alumina bulk. Alumina nanoparticles can be obtained by several methods including, pyrolysis, sputtering, sol gel and the most commonly preferred technique laser ablation [ 3]. Laser ablation is convenient since it can be performed in the gas, liquid or even a vacuum environment. This is very advantageous since the collection of nanoparticles in a gaseous environment is harder and cumbersome than in a liquid. It is also easier to set specifications for the kind of nanoparticles you desire to obtain. Aluminum nanoparticles are usually found in two states, nearly spherical shaped individual particles or as oriented fibers. The properties of bulk alumina that allow it to be such a versatile element in the industry are different from those of its nanoparticles. Bulk aluminum’s large diameter doesn’t allow it to have a larger surface of interaction with its surroundings. Thus, the applications of its use can’t efficiently be further expanded to other areas like catalysis or adsorption. Branching into the field of nanoparticles paints a new picture for the possible applications of the already useful and abundant compound of aluminum oxide. The decrease in size has various advantages but the important factor is the change in the chemistry of the nanoparticles compared to their larger counterparts that fascinates the incorporation of these nanoparticles into many fields of science and engineering.

Aluminum oxide is derived from mainly two sources, bauxite mineral and recycled Alumina. The main source of aluminum oxide is the ore of Aluminum the bauxite mineral. Bauxite mineral is actually not a mineral but a sedimentary rock that is comprised of Aluminum compounds in a mixture with other metals, non-metals and their oxides such as hematite (Fe 2O3), magnetite (Fe3O4) and quartz (SiO2). The biggest producers of bauxite are countries like Australia, China, Jamaica and Brazil. There is a smaller natural source of Alumina known as corundum but it is often categorized as a gem due to its properties of light absorption and reflection in the visible range when mixed with transition metals, the resulting crystal is colorful and beautiful. Other feasible sources of aluminum oxide are from recycling of the virgin Aluminum. The differences in properties and functionality of virgin Aluminum and its recycled counterparts are almost non-existent. This is a result of the durability and hardness properties of aluminum oxide. A smaller amount of energy is used in recycling and the amount of unrecyclable Aluminum oxide is as low as 10% [ 1], making this specific source a very compelling one especially for industries that use a lot of Aluminum oxide such as construction companies. These two sources provide enough Aluminum oxide for the whole world but since mining is involved then better methods ought to be invented for the sustainability of our planet.

After obtaining the bauxite mineral it is crushed and purified to Aluminum using the Bayer process. Aluminum oxide is obtained before the final production of Aluminum just after the bauxite mineral has been washed with the hot solution of sodium hydroxide giving out Aluminum hydroxide which is afterwards calcinated to Alumina. Nanoparticles of alumina are then developed from the obtained alumina bulk or rarely corundum. The preferred method of nanoparticles production is laser ablation due to its versatility on the size of nanoparticles made and the different media on which it can be performed for convenient collection of the nanoparticles which are mostly pure since the laser beam is pure itself. The laser beam interacts with the solid that it is focused on to form a plasma and the evaporation of different types of particles from individual atoms, ions and electrons to molecules and clusters of molecules. The evaporated particles form a fume that keeps expanding with time. The expanding flume then meets with an ambient gas in the setup or a different fluid interacting with it to form nanoparticles of Alumina [ 3]. The nanoparticles are then analyzed using emission spectroscopy, transmission electron microscopy (TEM) or X-ray Diffraction (XRD) to characterize the type of nanoparticles that have been collected.

Cliick to learn Differences Between Alpha and Gamma Alumina Nanoparticles 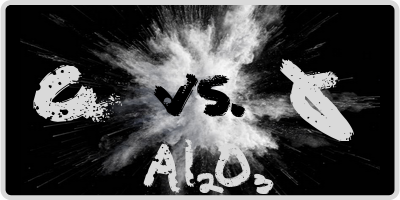 Nanoparticles are used in different branches of medicine for drug delivery. The power of nanoparticles in the delivery of drugs into the body is on the accuracy of the dosage that they can release at a programmed time at very specific locations in the body. This results in increased therapeutic efficiency of the drugs and even decreases the number of side effects that could be caused if the drug was delivered using the existing methods. The durability of Alumina nanoparticles makes them a good candidate for the intravenous drug delivery into parts of the body that have very low pH that may have degraded other nanomaterials before they reached their destination. Aluminum toxicity is something of concern to most people especially in the recent times when they have been many alleged connections between aluminum and cancer. A carcinogenic effect of aluminum has not been proven to date [ 2] but that is not to say that aluminum is not carcinogenic thus caution should be taken when applying aluminum nanoparticles in drug delivery.

The deviation of the physiochemical properties of nanoparticles from the bulk present an interesting opportunity for the production of novel nanomaterials. These novel nanomaterials of Alumina will have specific optoelectronic and physiochemical properties for various applications in the industry. The alumina nanomaterials can be found in cosmetics as fillers, produced as single crystals for YAG laser applications, high strength ceramics, catalysis and plenty other areas in the industry. The manufactured nanomaterials also do enjoy a lot of considerable utilization in the mechanical industry especially as cutting tools for the case of Alumina nanoparticles. Other uses may include; used as the baseboards of integrated circuits, polishing materials, vapor depositioning substance, integrated into plastics for increased hardness, packaging materials etc.