Nanotechnology, apart from its multiple applications, is beginning to be used for the benefit of the arms industry. This raises the possibility of terribly effective and devastating new weapons. Thanks to graphene and nanotechnology, rifles of all kinds can be manufactured. Integrated computers would allow the remote control of any weapon as well as a more compact assisted operation would facilitate better robotics. In addition, these materials would be manufactured with a minimum amount of metal, so it would be much more difficult to locate them by radar. These ideas are only a small part of all the possibilities that would trigger the use of Graphene in the arms industry.

While talking about its structure, Graphene is a substance formed by pure carbon atoms arranged in a hexagonal structure. It is very light, a sheet of 1 square meter weighs only 0.77 milligrams. It is considered 200 times stronger than steel and its density is approximately the same as that of carbon fiber, being approximately 5 times lighter than steel. This and some other peculiar characteristics of Graphene allows its use in a variety of industries. This article aims to discuss the defense and military applications of graphene.

Defense and Military Applications of Graphene

One of the most popular military applications of Graphene is the possibility of manufacturing robot suits. These costumes provide soldiers with the ability to defend themselves against any attack. Moreover, it also allows individuals to solve some social problems of today, such as environmental deterioration problems. Similarly, Graphene has various applications in the military industry. Some of them are discussed below:

Graphene has significant potential in personal bullet protection technologies. Researchers from Spain have developed a nanocomposite material reinforced with graphene that has significantly improved the mechanical properties of the original composite material, as evidenced by tests carried out with the impact of military ammunition. The study highlighted significant improvements in graphene-reinforced compounds, in terms of ballistic protection. The tests have been carried out in collaboration with the Marine Corps, in its facilities of the Naval Station of the Algameca (Cartagena). 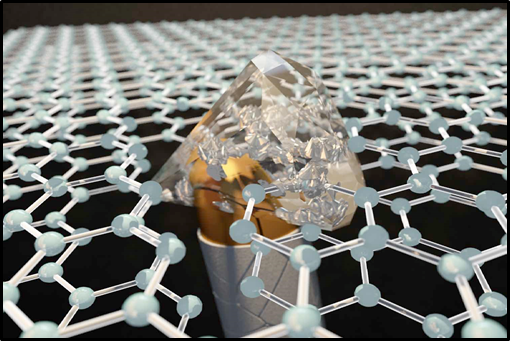 This is the first macroscopic study that is recorded in this line of research, and constitutes a significant advance in personal protection technologies (vests, plates and other bulletproof elements), which could allow the replacement of current equipment with the new ones of more modern technology that provide better protection because of being lighter and more comfortable in nature. These characteristics could increase the security and protection of the military and therefore, their operational capabilities.

The study was carried out by a group of scientists from the Technical University of Cartagena (UPCT), who have manufactured a series of laminates with fiber-reinforced resin matrixes and doped with graphene. The objective was the study of Graphene’s most significant mechanical properties for its potential application within the defense sector.

In terms of structural properties (breaking stress, Young’s modulus, delamination, impact resistance, and others), the nanocomposite developed in this work is more resistant than unmodified laminate. This is due to the graphene reinforcement capacity to improve the interaction between the matrix and the fibers on a nanometric scale.

The tests for the characterization of ballistic properties (ballistic limit, absorption, and dissipation of energy, multi-impact capacity, among others) were carried out in collaboration with the Marine Corps, as previously indicated. The tests were carried out according to NATO standards with 7.62×51 mm FMJ military ammunition, fired by an Accuracy International AW precision rifle. The developed nanocomposite has proven to have an improved ballistic limit as compared to the original laminate, also presenting a better ability to dissipate impact energy and without increasing its density appreciably.

The results obtained were presented at the prestigious scientific conference “Graphene Week 2017”, held in Athens. Various companies and international organizations in the sector, for example, the European Defense Agency expressed interest in this new technology.

2.Graphene to reduce the weight of protection armor

Researchers at Imperial College London are aiming to reduce the weight of protection armor by combining silk and graphene. The hypothesis of the study was that by refining the internal layer of Kevlar, they could decrease the size of the ceramic external layer, making the vest much lighter and comfortable. They first thought of using spider silk but quickly concluded that it would be too expensive and difficult. Instead, they turned to silkworms, and as this is not as resistant as spider silk, they added graphene.

The team decided to make an organization called Synbiosys to discover this idea and received funding of project from the Defense and Security Accelerator (DASA). The project has so far focused on the successful combination of both materials in a composite. “The incorporation of carbon nanostructures, such as graphene, into silk, has already been tried, but not effectively,” the team said. One group of researchers tried to spray carbon nanotubes onto mulberry leaves before feeding them to silkworms.

The team of Imperial College focused instead on the use of graphene with silk, rather than the animal, and indicated that this method can be used to make composite and thin films. They then verified the film with small pieces of metal, by means of a special lab device, and noted the consequence of the impact. The experiments showed that adding graphene on silk upsurges the strength of the composite. Strength is significant because sturdier materials will work efficiently, and this test legalized their idea of graphene enhancing the silk strength. The silk-graphene composite is lightweight and transparent. It has properties that make the material appropriate for uses beyond armor. The team is now focusing on improving prototypes and patent applications.

To date, Graphene has found wide applications in science and engineering, and all thanks to the superior properties of this substance, which ensures the improvement of the characteristics of the materials constituting the composite substrate. The unique applications of graphene in the military aviation industry are already under observation. Graphene does not harm the aircraft fuselage when exposed to low temperatures, which greatly increases the safety of flights, and doesn’t require additional investments in the treatment of different types of aircraft liquid deicing operations.

At present, the prototype of this aircraft has already been created, and as part of the study, the experts were able to discover that the use of composite materials, which are based on graphene, provides the aircraft with improved aerodynamic characteristics. This is mainly due to the reduction of drag in flight. The friction force is reduced by an average of 5% to 7%, which consequently decreases the fuel consumption that is already a technological breakthrough and is very important for the military and civil aviation industry.

In the course of further research, the experts were also able to establish the fact that the use of graphene reduces the weight of the aircraft, and this is very beneficial in addition to other advantages. There is also a significant increase in the strength and durability of fuselage parts of an aircraft, particularly when compared to aircraft manufactured using conventional materials. The resistance of the aircraft made with the use of graphene-based composite materials is increased on an average of 10%. Further research on this aspect can achieve 60% strength.

In addition, during the test, it was found that graphene is able to withstand even a thunderbolt, which is also an important aspect of the aviation industry and applies it to large and small aviation, where the proportion of aircraft accidents has increased by 75% due to contact with lightning in recent years. The only negative point of applying graphene composite materials is the high cost of using this material, however, scientists believe that by the year 2020, they will be able to design a cost-effective aircraft based on Graphene. Therefore, the research indicates that Graphene is very beneficial if it is introduced in the military aircraft as it will decrease the weight and friction of the aircraft. This would allow the military aircraft to move with greater speed.

Similarly, Graphene has an important use when talking about the helmets used by soldiers on the battlefield. The incorporation of Graphene in helmets for the military would greatly benefit the soldiers as its weight will be reduced to a greater extent. The soldiers wear bulky helmets on the battlefield which greatly affects their efficiency. A helmet for traveling on a motorcycle covered with graphene has already been introduced in the market. The helmet benefits from the inclusion of the aforementioned material by coating its exterior with it, the result provides improved thermal comfort and better safety. The graphene layer permits a good distribution of the impact force, making the helmet less vulnerable to injury related to those devoid of this coating, even in high-temperature circumstances. It is the excellent thermal conduction property of graphene that dissipates heat rapidly throughout the hull, and due to this, not only the internal materials are protected from degradation caused by heat, but also the comfort level of the helmet is increased for the user. The Graphene helmets also have a greater life.

These helmets are being manufactured in a workshop in northern Italy. The process of graphene coating has been initiated straight into the current production line. The investigator Vittorio Pellegrini has played an important role in this breakthrough. The project was funded by the European Union. 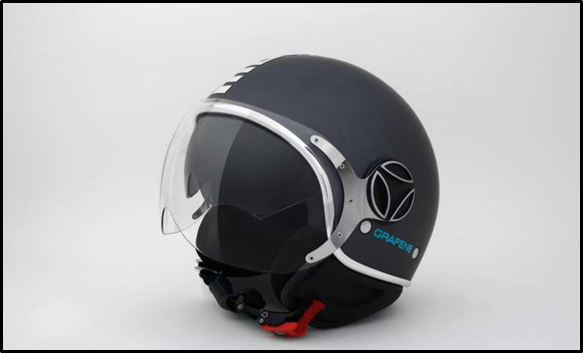 Thus, the scientific communities, industries, and militaries around the world are fascinated by a new material that, by its extraordinary properties and multiple practical applications, will undoubtedly change many aspects of our lives: we have named it Graphene. It is a transparent material, extremely thin (the finest possible), very light (0.77 milligrams per square meter), impervious, elastic, flexible and, at the same time, incredibly resistant. Graphene is the best conductor of electricity known to date and, moreover, it is found in abundance in nature, which makes it cheap. All these characteristics unleash its potential in the Military sector. In the Military sector, it can be used for making bulletproof jackets, lightweight and more strong helmets, lightweight and more resistant military aircraft, advanced vehicles, etc. It is expected that in the coming years, many more uses of Graphene in the military sector will be discovered which will greatly enhance the capabilities of armies around the world.