IT’S NOT EASY TO LEARN WONDER MATERIAL GRAPHENE IN MERE MINUTES. HOWEVER, YOU CAN EXTEND YOUR HORIZON ON GRAPHENE’S HISTORY, PROPERTIES, AND APPLICATION. SEE HOW FULLERENES, NANOTUBES, AND GRAPHENE HAD AN IMPACT ON PRACTICAL SCIENCE.

Find out more about Graphene in this comprehensive post: The Ultimate Guide to Graphene

Graphene is a rigid two-dimensional (2D) monolayer allotrope of carbon shaped like a hexagonal lattice with a thickness of as much as one carbon and a regular carbon-carbon bond distance of 0.142 nm as it is illustrated in Figure 1. The 2D nature of graphene makes it possible for this super crystal to be wrapped into a number of graphene-based allotropes including zero-dimensional fullerene (Figure 2) or rolled into one-dimensional carbon nanotubes (Figure 3). Interestingly, graphene can be stacked on each other in order to make graphite which is originally the material from which graphene is originated in industrial scales (Figure 4). The unique properties of graphene and its ever-growing applications in science and industry got the Nobel Prize in Physics in 2010 and the Graphene Gold Rush began 1.

Figure 1. The hexagonal structure of graphene

Prior to mentioning the unique properties and specifications of graphene, it seems necessary to have a review of two-dimensional materials in short. Technically, a 2D material is a plane of single atom crystal, whereas the three-dimensional ones have at least two to thousands and even millions of layers stacked on each other. Two-dimensional materials, with graphene as the most crystalline, show metastable high crystal properties as they originate from 3D solids. 2D materials in general, have remarkable thermal stability and strong interatomic bonds making them resistant against elevated temperatures.

Compared to usual three-dimensional materials, graphene shows rather different electronic structure. In the undoped graphene (pure and not modified), the Fermi level is situated at the connection points (known as Dirac points) of six double cones where its states density falls to zero (Figure 5). This causes the electrical conductivity to be pretty low. However, the Fermi level can be altered through applying an electric field in order to make the graphene electron-rich (n-doped) or porous (p-doped) based on the polarity of the electric field. The doped graphene has potentially higher electrical conductivity than copper at room temperature2. 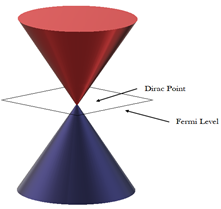 As one of the most transparent materials, 97.7% of the incident light in the optical region can go through graphene while a normal glass used in windows has transparency of 88 to 90 percent. Unlike other low temperature 2D materials, graphene can retain its 2D properties at room temperature. It is 200 times as strong as steel and only one gram of that is enough to cover one football pitch and, in the meantime, it is among the most pliable materials. Like a rubber band, graphene can be stretched 20% while maintaining its electrical conductivity, whereas, silicon, which is widely used in electronics, can only be stretched only 1 percent of its length. This super material is 10 times more conductive than copper. All in all, graphene is one of the very few materials which is transparent, conductive and flexible.

Thanks to the appearance of graphene, the areas in science and industry such as physics, chemistry, nanoscience, nanotechnology, aerospace, electronics, polymer and many others have bloomed in recent years. The unique properties and versatility of graphene have appreciably drawn scientists, researchers and engineers’ attention to employ this super material where a revolutionary change is felt. There is now a practically huge directory of graphene applications in science and technology such as photovoltaic cell, transparent and flexible electronics, thermoelectric applications, self-healing materials, photomechanical actuators, piezoelectric materials, multifunctional graphene nanocomposite, foams for space applications, electrorheology materials, gas and biosensors, transparent electrodes, batteries and so forth. Here in this review, a number of graphene applications are discussed.

The deep, dark and infinite space is where the science has focused to find answers for numerous questions mankind has. Space exploration and the search for new sources of energy require sophisticated equipment resistant against the extreme conditions (too high and low temperatures) and dangerous radiation. Additionally, devices and materials need to possess reduced volume as well as desirable functionality with low weight. In fact, the main reason a satellite is expensive is the technology used to propel it and push it towards orbit (nearly 7 million dollars). Due to higher conductivity and truly lighter weight, graphene can efficiently replace copper to finally reduce the weight of a Boeing 747 by two tons (4000 lbs) and one third of large satellites, according to a report by NASA 4.

A common application of graphene, which is based on its remarkable conductivity, is in sensors. The basic principle of this sensing ability is due to a change in electrical conductivity induced by adsorption of molecules on its surface and resulting a doped graphene. In detail, any guest molecule’s immobilization on the surface of graphene acts as a donor/acceptor interaction with promising sensitivity in detecting a given analyte at single atomic of molecular level according to three mechanisms. First, the considerable sensitivity of graphene-based sensors is due to the fact that all carbons in its structure involve in sensing and get exposed to the analyte under study. The second reason is this 2D crystal is highly conductive with the lowest electronic noise (which happens in the absence of any applied voltage due to thermal agitation of charge transmitters within an electrical conductor at equilibrium conditions). This is the mechanism through which the sensing is carried out based on graphene as any ignorable change in a particular concentration can result in a significant change in graphene’s electrical conductivity. Finally, graphene has the lowest amount of interference because of the thermal switching as it has the least defects as a crystal. Taking the sensing advantage of graphene, a series of gases and molecules have been detected namely NO2, NH3, CO and H2O 5.

In industry, indium tin oxide (ITO) is extensively used in manufacturing transparent conductive coatings for flat screen displays, touch screens, LCDs (liquid crystal display) and solar cells. Nevertheless, indium is an expensive element that can’t be supplied broadly. Moreover, the fragile, brittle and inflexible nature of indium require the science and industry to consider a capable alternative instead and graphene is the promise5. Therefore, the exceptional chemical, mechanical and thermal stability, one-atomic thickness as well as graphene’s highly transparent quality make it a highly potential candidate to replace the common materials in electronics, smart phones, laptops and tablets touch screens, computers and, etc. In addition, the high surface area and the inertness against oxygen and water (not oxidized while submerged in water), make graphene a perfect material for photovoltaic applications. There are reports on synthesizing graphene sheet on Ni as the substrate to be applied as small transparent electrodes in scientific studies in the field of electrochemistry 5.

The fast growth of the Internet and smart phones use in this modern age with billions of user across the globe, the need to have access to the huge source of online data everywhere and all the time require us to have our electronics charged almost all the time and the burden is on the source of electrical energy called batteries. More importantly, the progress in batteries capacity and rechargeability seem vital due to environmental aspects and clean energy source. It is the time to fully consider cars and transportation devices which completely run on electricity and nothing else. There is a huge concern about the environmental crisis mostly caused by burning fossil fuels and the consequent contribution of significant amount of CO2. For a considerable extent, batteries with higher capacity and longer lifespan are a solution for the moment again with the promise of graphene. Lithium-ion batteries are the most widely used component used in electric device now. Unlike graphite which was conventionally used as anode in batteries, graphene-based anode in today batteries exhibits higher capacity, stability, super conductivity, chemical resistance and mechanical strength.

With regard to the unique properties and its versatility in different fields of science and sectors of industry, graphene is among the most potential super materials to bring about breakthroughs never seen before. The high conductivity, flexibility and transparency of graphene has motivated many manufacturers in electronics, car industry and aeronautics to employ it as a highly qualified alternative to replace copper wiring, conventional batteries, car and airplanes body parts and, etc.